The CRU Climate Scam In 90 Seconds


The cache of leaked documents from Climactic Research Unit (CRU) at the University of East Anglia is a veritable treasure trove of fraud, cover-ups and faux science. London's Daily Mail reports:

The leak has been a huge embarrassment to the climate unit at the University of East Anglia, which is a global leader in its field.

The scientist at the heart of the climate change scandal was under growing pressure to quit last night. 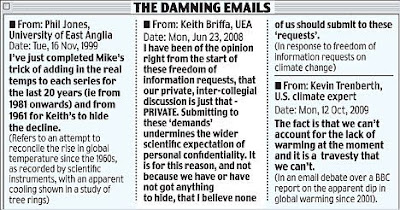 George Monbiot, a leading environmentalist, said Phil Jones should resign from the Climatic Research Unit over leaked emails that appear to show researchers suppressed scientific data... More emails came to light yesterday, including one in which an American climatologist admitted it was a travesty that scientists could not explain a lack of global warming in recent years.

In another note, UK researchers dismissed the work of scientists challenging global warming as 'crap'... Another appeared to call for pressure on the BBC after a reporter suggested that evidence for rising temperatures since 2001 was thin...

Best of all, the scientists at the heart of the global warming scam -- like the reprehensible pair of Phil Jones and Michael Mann -- are now laughingstocks.