The name David Coleman Headley doesn't trip off the tongue quite the way Nidal Malik Hasan does, but the two have something in common. Both are U.S. citizens who felt the pull of Islam was stronger than our Constitution's or our way of life. Headley, along with a Canadian citizen, was arrested last month for alleged roles in conspiracies to provide material support and/or to commit terrorist acts against overseas targets, including facilities and employees of a Danish newspaper that published cartoons of the Prophet Mohammed in 2005. To refresh your memory, the Reuters story is here. 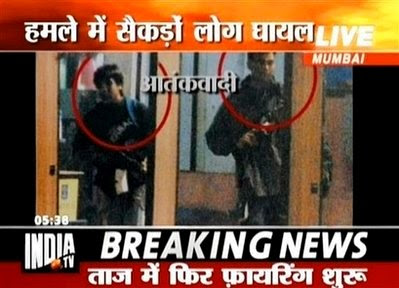 You are excused if it doesn't ring a bell. The story of Headley and friend received short shrift by the media at the time, and until today was essentially put to bed. But now a new wrinkle has emerged and it will be interesting to see if, or how, the newshounds downplay this.

According to a report in the Calcutta Telegraph, "David Coleman Headley personally visited every target site of the 11/26 Mumbai terror strikes last year, carrying out reconnaissance on behalf of the Lashkar-e-Toiba, a police source said
today. Posing as a Jew, he even visited Nariman House, the Jewish Chabad centre, in July 2008." Put another way, Headley (nee Daood Gilani) turns out to be an
important operative with one of the largest and most active Islamist terrorist organizations in South Asia. At the moment, this little item is only making waves in the Indian press. But I'll be curious what, if anything, the morning brings over here, now that I've let the cat out of the bag. Whatever, don't you think it's reassuring that Barack Hussein Obama has declared there's no such thing as a war on Islamic terror?

I thought we were supposed to call the war on terror one of the following?