Is the Ukrainian 'super bug' a mutated swine flu?

British scientists are examining the strain of swine flu behind a deadly Ukrainian outbreak to see if the virus has mutated... A total of 189 people have died and more than one million have been infected in the country. 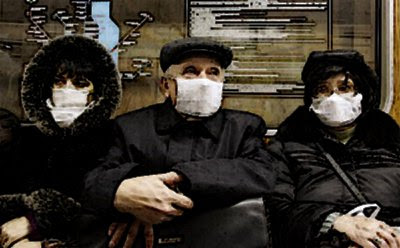 Some doctors have likened the symptoms to those seen in many of the victims of the Spanish flu which caused millions of deaths world-wide after the World War One.

An unnamed doctor in western Ukraine told of the alarming effects of the virus... 'We have carried out post mortems on two victims and found their lungs are as black as charcoal.

...President Yushchenko said: 'People are dying. The epidemic is killing doctors. This is absolutely inconceivable in the 21st Century... Unlike similar epidemics in other countries, three causes of serious viral infections came together simultaneously in Ukraine: two seasonal flus and the Californian flu.

'Virologists conclude that this combination of infections may produce an even more aggressive new virus as a result of mutation...'

My daughter woke up this morning in pigtails. Should I be worried?

at 9:30 PM
Email ThisBlogThis!Share to TwitterShare to FacebookShare to Pinterest
Labels: Healthcare, World