What do you call a president who presided over a 100 percent spike in food-stamp spending in only three-and-a-half years in office?

No, you can't. Because that would be racist. Or so the Left tells us.

The vast majority of federal spending in the Senate farm bill, which is estimated to cost over $100 billion annually, is going toward food stamps, representing a 100 percent increase since President Barack Obama took office, according to Alabama Republican Sen. Jeff Sessions.

“The legislation will spend $82 billion on food stamps next year, $82 billion and an estimated $770 billion over the next ten years. So, to put these figures in perspective, and they’re so large it’s difficult to comprehend, we will spend next year $40 billion on the federal highway program,” said Sessions, the ranking member of the Senate Budget Committee... 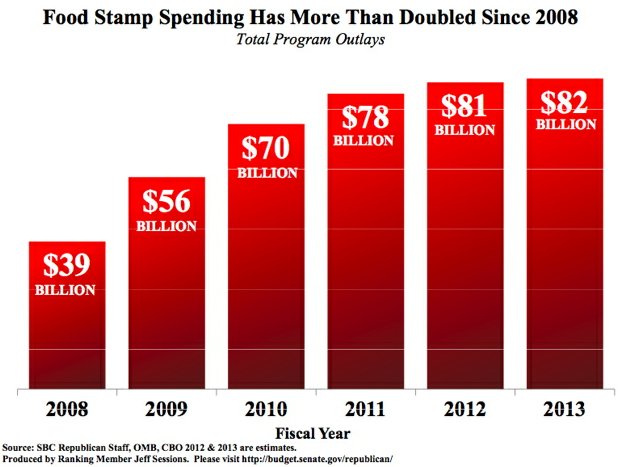 ...Federal funding for the Supplemental Nutrition Assistance Program (SNAP) program has doubled since 2008 which accounts for 80 percent of the farm bill’s cost, according to an analysis of Congressional Budget Office and White House Office of Management and Budget data conducted by the Senate Budget Committee’s Republican staff... 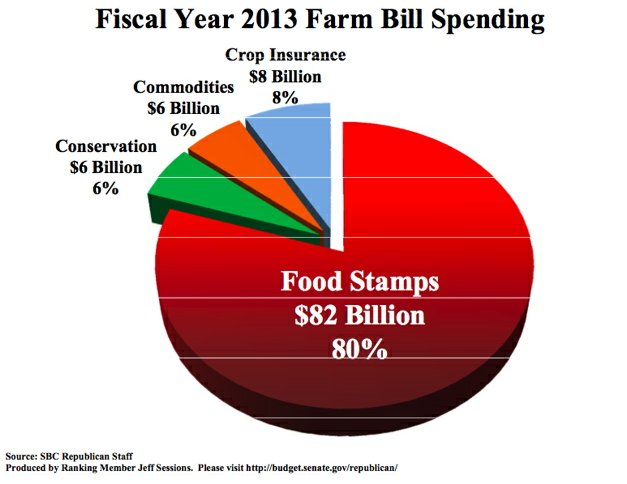 Food stamps are proven to lead to single-parent families and violent crime.

Food stamps are fraud-prone -- to the point where no one knows just how food stamp fraud there really is.

Food stamps are abused by Democrats to build a culture of dependency.

This is corruption and bribery. What is the NASA budget? I'll bet it isn't 84 billion. What is State's budget?

This is redistribution to those who will not work.

Food stamp use is at an all time high. In 2011, more than 46 million Americans—about one in seven—received food stamps. But President Obama’s Secretary of Agriculture Tom Vilsack doesn’t think that’s enough.

The US Department of Agriculture would like to see more people utilizing their Supplemental Nutrition Assistance Program (SNAP). The department believes that one reason more people don’t sign up is individual pride. In order to combat the deleterious effects of self-respect.

I did a piece on this at wwtft, complete with some pretty ugly quotes by some pretty disgusting bureaucrats.

This is what socialism is all albout. You think these numbers are accidental?

Who knew that our own president was a magician? First, he earned the Nobel Peace Prize for doing nothing. I guess pot smoking, public nudity and anti-American sentiment is all you need these days to earn an award given to such honorable people as Mother Theresa. Job numbers are down, unemployment is up, there is no plan for the next 4 years, we have no federal budget, our foreign policy is schizophrenic and the dollars is in the crapper. And despite all of this Obama’s approval rating still is above 40%. Now that’s the real magic! How could he do nothing right and still have any approval rating at all?


Maybe I can figure it out. What I learned about doing a real good illusion is a concept called misdirection. By definition misdirection is a form of deception in which the attention of an audience is focused on one thing in order to distract its attention from another. Well, I think that might just be the key. During the beginning of his tenure as president he misdirected all his failures towards President Bush, blaming him for the tanking economy and continued recession. More recently it looks like he used that same misdirection trick to disguise his abysmal tenure as president by blaming Greece, Europe’s financial instability and the Republican’s inability to pass any his bills. However, when he had control of both houses the only thing he was able to pass was an unconstitutional bill that would bankrupt the country.


It also seems the media has picked up on this trick. Take for instance the Catholic Church. Instead of properly reporting Obama’s hatred towards the church and the justified laws suits he is facing from them, the media instead cover the airways with stories of priest’s sexual misconducts. I understand Obama hates the Catholic Church but does that mean the news media has to also?


However, he’s attempting to use his last bit of misdirection to get himself re-elected. Because he certainly can’t run his campaign based upon his horrific record, he instead turned people’s attention to Governor Romney. Using the media as if it were a government run propaganda machine, he has done everything to discredit and vilify his opponent and wife. The problem with this strategy is that Governor Romney actually has really strong credentials. He is an excellent businessman, governor, statesman and father. He was not a drug abuser, school skipper or deadbeat. Thus, Obama has turned to lies and other untruths in order to continue his misperception.


Well Mr. Obama, I’ve watched the FOX series Magic Biggest Secrets Finally Revealed and know what you’re doing. It’s just a matter of time the whole country comes to their senses and realize what a disaster the last few years have been with you in the White House

For a "Conservation" focused president, the actual conservation budget of USDA has gone down every year now for three years while food stamps have been going up.