AND IN ENLIGHTENED SAUDI ARABIA: Two Asian Maids Sentenced to 10 Years and 1,000 Lashes for Practicing Sorcery

But according to Leftists like the loathsome Juan Cole, it's Israel that's barbaric. 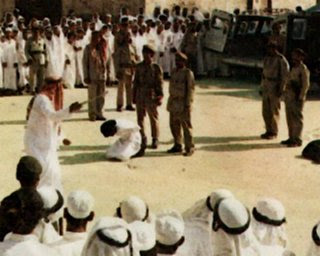 A Saudi court sentenced two Asian housemaids to 10 years in jail and ordered their lashed 1,000 times each after they were found guilty of indulging in sorcery at their employers’ houses... Their Saudi employers reported the two maids to the Gulf country’s feared religious police, saying they had discovered that their families had been harmed because of sorcery practiced by the maids against them.

Members of the Commission for the Promotion of Virtue and Prevention of Vice who searched the two houses in Riyadh found talismans and other magic items in the bedrooms of the two maids... Saudi Arabia, which strictly enforces Islamic law, has beheaded many persons convicted of practicing magic over the past years.

And I'm sure they were given a fair trial with a jury of their peers.

PATHETIC.Barbarian. Worthless pieces of camel crap who have contributed nothing but misery to all others on Earth.

You can apply this to any number of groups, but you'll get the general idea. From K-Bob's Codex, #3:

3) Gays are far safer behind conservatives with guns than they are among the jihad-enabling, individual-liberty-denying, totalitarian Left.