Well, this isn't suggestive of a cover-up:

The director of the Internal Revenue Service’s Exempt Organizations division, Lois Lerner, is invoking the Fifth Amendment and will not appear before Congress to answer questions about the agency’s targeting of Tea Party and other conservative groups. 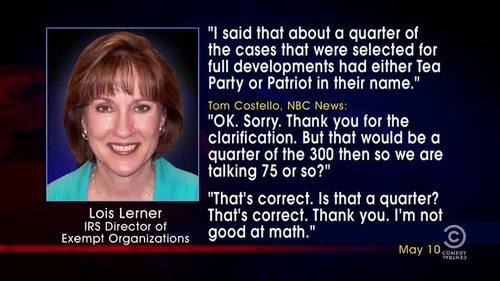 Lerner was scheduled to appear before the House Oversight committee tomorrow to discuss the improper conduct of IRS employees who singled out conservative groups, and why she failed to bring that behavior to the attention of Congress.

...In testimony before the House Ways and Means Committee last week, the outgoing commissioner of the IRS, Steven Miller, revealed that Lerner initially disclosed the IRS’s targeting of conservative groups by planting a question at a conference hosted by the American Bar Association.

Not so fast, honey.

The National Journal reports that Chairman Issa has issued a subpoena to compel Lerner to appear before the committee.

Lerner, you may recall, was the same political hack who got her Leftist wings targeting conservative groups at the Federal Election Commission (FEC). 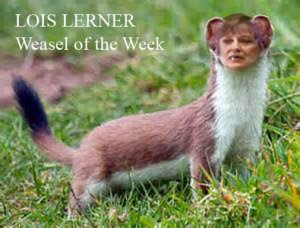 Lerner's tenure as head of the Enforcement Office at the Federal Election Commission (FEC) was marked by what appears to be politically motivated harassment of conservative groups...

In the late 1990s, the FEC launched an onerous investigation of the Christian Coalition, ultimately costing the organization hundreds of thousands of dollars and countless hours in lost work. The investigation was notable because the FEC alleged that the Christian Coalition was coordinating issue advocacy expenditures with a number of candidates for office. Aside from lacking proof this was happening, it was an open question whether the FEC had the authority to bring these charges...

...The FEC conducted [81 depositions and] a large amount of paper discovery during the administrative investigation and then served four massive discovery requests during the litigation stage that included 127 document requests, 32 interrogatories, and 1,813 requests for admission. Three of the interrogatories required the Coalition to explain each request for admission that it did not admit in full, for a total of 481 additional written answers that had to be provided. The Coalition was required to produce tens of thousands of pages of documents, many of them containing sensitive and proprietary information about ﬁnances and donor information. Each of the 49 state afﬁliates were asked to provide documents and many states were individually subpoenaed. In all, the Coalition searched both its offices and warehouse, where millions of pages of documents are stored, in order to produce over 100,000 pages of documents...

One of the most shocking things about the current IRS scandal is the revelation that the agency asked one religious pro-life group to detail the content of their prayers and asked clearly inappropriate questions about private religious activity. But under Lerner's watch, inappropriate religious inquiries were a hallmark of the FEC's interrogation of the Christian Coalition.

In short, Lerner is a Leftist apparatchik who has no business serving in government.

Jeffrey Lord sums up the ramifications of these outrages:

With the IRS assuming serious police powers of Obamacare, in effect the members of one left-wing labor union will have access to the private health care records of every single American.

Interestingly, the IRS workers themselves want no part of Zerocare:

The National Treasury Employees Union, NTEU, which represents the IRS employees who harassed and delayed tea party and conservative groups, has come out against the proposal to put federal workers into exchange-based health insurance.

Fancy that: the people in charge of deciding whether you go into an exchange, and who decided it doesn't matter whether your state doesn't want one, don't want to be in one themselves.

This administration is completely out of control. It's time to dismantle and defund it, starting with the IRS.

Only criminals plead the 5th.

Only a matter of time till she rats out Obama. (Calling Boehner to the rescue!)

We have been reading about 'it' since Obama took office. Our Federal government, in particular, is saturated with anti American radicals in key political positions.

One wonders whether her ill-considered remark about not being "good at math" prompted the PTB to demand she take the fifth. She's obviously not used to being questioned or second-guessed and I suspect they figured she would fold like a $3 suitcase if Congress got her up there under oath.