Suspects involved in a drug trafficking operation opened fire on investigating Miami-Dade Police detectives in a deadly gunfight captured by the video surveillance cameras of a marijuana grow house.

The dramatic footage, which was played Thursday at a court hearing, shows the rapidly unfolding gunfight at the west Miami home. Plainclothes detectives had visited the home on July 31 for a "knock and talk" during their investigation. 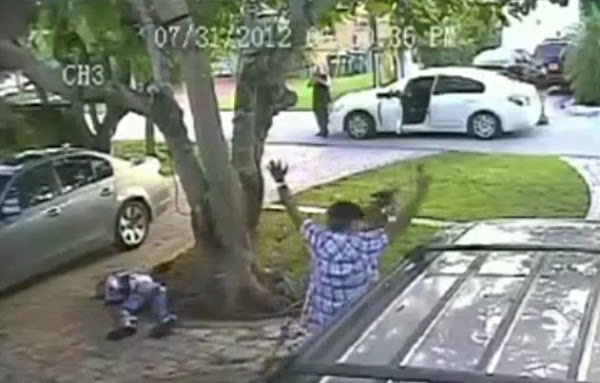 After arriving, they began to question Luis Estevanell, 60. Estevanell's cohort, Gerardo Delgado, emerges from a parked BMW and opened fire at the officers while attempting to take cover behind a tree.

The officers returned fire striking Delgado several times as the suspect continued firing. Three rounds from Delgado struck John Saavedra, who can be seen falling outside the screen.

Thank heavens no LE folks were injured or worse.

The first mistake for the 2 door knockers was walking right by the vehicle the beaner was sitting in. They should have noticed him at the first and not walked by.
Was Saalvedra a Cop? He drew and shot the perp as well, several times perhaps. When things go bad they go fast. I'd bet the Officer in blue was an Iraq Vet. Good aquisition, movement as well as shooting under stress.