IT'S COME TO THIS: Holder Justice Department Says It Will Help Enforce Islamic Sharia Law

You just knew this was coming, didn't you?

In its latest effort to protect followers of Islam in the U.S. the Obama Justice Department warns against using social media to spread information considered inflammatory against Muslims, threatening that it could constitute a violation of civil rights.

[Ed.: Apparently the DOJ needs to read the Bill of Rights again and, in particular, the First Amendment.]

The move comes a few years after the administration became the first in history to dispatch a U.S. Attorney General to personally reassure Muslims that the Department of Justice (DOJ) is dedicated to protecting them. In the unprecedented event, Attorney General Eric Holder assured a San Francisco-based organization (Muslim Advocates) that urges members not to cooperate in federal terrorism investigations that the “us versus them” environment created by the U.S. government, law enforcement agents and fellow citizens is unacceptable and inconsistent with what America is all about. 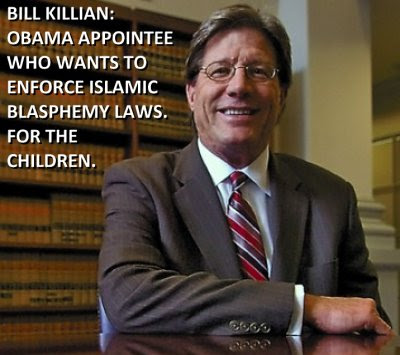 ...Evidently that was a precursor of sorts for an upcoming Tennessee event (“Public Disclosure in a Diverse Society”) that will feature the region’s top DOJ official [Bill Killian], who serves as U.S. Attorney for the Eastern District of Tennessee, and an FBI representative. The goal is to increase awareness and understanding that American Muslims are not the terrorists some have made them out to be in social media and other circles, according to a local newspaper report. The June 4 powwow is sponsored by the American Muslim Advisory Council of Tennessee.

The area’s top federal prosecutor, Bill Killian, will address a topic that most Americans are likely unfamiliar with, even those well versed on the Constitution; that federal civil rights laws can actually be violated by those who post inflammatory documents aimed at Muslims on social media. “This is an educational effort with civil rights laws as they play into freedom of religion and exercising freedom of religion,” Killian says in the local news story. “This is also to inform the public what federal laws are in effect and what the consequences are.”

...Over the years the Obama administration has embarked on a fervent crusade to befriend Muslims by creating a variety of outreach programs at a number of key federal agencies. For instance the nation’s Homeland Security covertly met with a group of extremist Arab, Muslim and Sikh organizations to discuss national security matters and the State Department sent a controversial, anti-America Imam (Feisal Abdul Rauf) to the Middle East to foster greater understanding and outreach among Muslim majority communities.

The president has even ordered the National Aeronautics and Space Administration (NASA) to shift its mission from space exploration to Muslim diplomacy and the government started a special service that delivers halal meals, prepared according to Islamic law, to home-bound seniors in Detroit. [And who] could forget Hillary Clinton’s special order allowing the reentry of two radical Islamic academics whose terrorist ties have long banned them from the U.S.?

In other words, criticizing Islamofascism -- the political strain of Islam -- could very well be criminalized by the Obama-Holder administration. The Islamist term for this crime is "Blasphemy", which may include one or more of the following:


This crime is, in many cases, punishable by death.

In other words, you are no longer living in America.

"[And who] could forget Hillary Clinton’s special order allowing the reentry of two radical Islamic academics whose terrorist ties have long banned them from the U.S.?"

It should not be forgotten that Hillary's senior adviser has been Huma Abedin, she of the Saudi-based family in very deep with Muslim Brotherhood.

I think this guy should spend a little more time reading the first amendment and a little less time kissing terrorist, pedophile ass.

If I were this guy's wife or daughters, I would be a little worried about what his embracing, and his defense of muslims and islam, meant for my future.

You don't defend violent misogynists, like muslims, unless you feel a connection to it's teachings.

Islam is a philosophy of hate- but then you might have to actually read the Quran before offering up an opinion.

Whenever someone trumpets the virtues of Islam, I ask them if they've read the Quran. Some even attempt to lie, but I have a list of followup questions that exposes that- chop chop.

I can't wait until the Indonesian muslim gets his worthless ass out of the WH. It just gets worse by the day.

I will speak ill of Muslims if I want. Come and get me so I can sue you for $10 million.

This article gave me a Hummatoma.
This isn't the DOJ anymore it is a Frankenstein at war with America.

This has NOTHING to do with Islam, as much as it has to do with having precedent to enforce laws against free speech.

That's the goal. If they weren't using Islam as a shill, they'd be using something else.

We have GOT to push these people back off the cliff.

If the regime is allowed to get away with this, Americans will no longer possess even the least vestige of freedom. Killian must be challeged sharply and whipped back into his kennel.

The hour has come for ultimate choices: Live as free men, or accept fetters we will never, ever remove.

"the political strain of Islam"

Yeah, that's called "Islam." The longer we go before we acknowledge publicly that Islam is a political ideology masquerading as a religion, the more deeply entrenched it will be and the more difficult to eradicate.

I will not submit.

Reading the Constitution won't make a dent on people like that -- they would say, like Ezra Klein did, that it was written by dead white men more than 100 years ago in a language nobody today understands, so it isn't relevant.

Come on, this is America! I believe in freedom of religion but not a religion at war with itself over the basic principles of the value of a human life, American lives. These people can’t even decide within their own religion if it’s ok to murder non-believers, over half of the Muslim population are committed to global jihad. America has enough problems and sharia law shouldn't be one of them, we already are in a fight for our 1st amendment (as well as 2nd, 3rd, and on). Obama's 2nd term agenda sure is surfacing now. Prayers for America, in Jesus name, Amen. This entire administration needs to go! Now put me on that 'watch' list, I"m a patriot and proud.

You want to bring civil war to the United States just continue down this path. We fought to free African Black SLAVES and now you want to enslave them again.

You want to bring civil war to the United States just continue down this path.

We fought a civil war to free African Black SLAVES and now you want to enslave them again.

It seems Bill Killian will do whatever he can when it comes to people's rights. This came from a 2011 case, in which a peace activist who was also a Catholic nun, broke into a nuclear facility and vandalized it with graffitti.
Wrong thing too do, but Killian was lead prosecutor, and did everything he could to trample her right to a fair trial, including a request to bar all evidence concerning her first amendment rights.

"On Nov. 2, prosecutors led by U.S. Attorney William Killian offered a motion “in limine,” urging U.S. Magistrate C. Clifford Shirley to “preclude defendants from introducing evidence in support of certain justification defenses.” The motion asks the court to forbid all evidence — even expert testimony — about “necessity, international law, Nuremberg Principles, First Amendment protections, the alleged immorality of nuclear weapons, good motive, religious moral or political beliefs regarding nuclear weapons, and the U.S. government’s policy regarding nuclear weapons.” The “basis” for excluding evidence regarding the threatened use of our H-bombs is that it is “not relevant.”

'I can't wait until the Indonesian muslim gets his worthless ass out of the WH':

You will have to wait for another 3 1/2 years, if I've counted correctly. His (2nd!) tenure has just started, remember?

I don't want to brag, but as a european I was already instinctively worried before his 1st tenure, after having heard who he is...

I feel fear whenever I see a muslim moving into my area. I worry that Sharia Law will over take our constitution. I fear that trillions of dollars of Arab Oil money will conquer America. I fear for the lives of my children and grandchildren. I fear that the impossible is happening, Islam is taking over our; federal, state and local governments. I fear that most black christians are being deceived by apostate pastors that have sold out to Islam. I fear that most Americans and Europeans are unaware of the grave danger to their freedom and very lives that is imminent.

This is about the end of the world ppl!!!! Gee ,read the book called the holy bible!!!! This will all come to pass and its only gonna get worse...Yea yea yea i knw 75% of you dont believe in the 2nd coming of Jesus....well i guess if i can go from wiccan to Christian, anything is possible...sharia laws are illegal...yes....but the government can do anything it wants to and get away with it.They can make ppl disappear too...We have to help each other as ppl,not democratics or republicians...for that matter not even as Americans...but as humans.My grandfather and my father fought for FREEDOM...NOT JUST MINE BUT EVERYONES....and the government is just SMACKING them in the face by doing the things they are doing...I WILL NOT SUBMIT TO EVIL!!! JESUS CHRIST IS THE TRUTH,THE LIGHT, AND THE WAY!!!! I pray for our safety n guidence, ....and for enemies n haters the may the Lord show you mercy....God says to pray for our enemies....ps...watch out for the bitcoin that is coming soon to be our new currency....its the mark of the beast