OBAMA AIDE: It's Now "Offensive" to Ask What President Did for Eight Hours as Four Americans Fought and Died in #Benghazi

The White House appears to be in full cover-up mode over the President's missing eight hours as the Benghazi attack unfolded.

The latest evidence: Obama aide Dan Pfeiffer appeared on Fox News Sunday and made the astounding claim that asking questions about the President's actions during the terror attack "is offensive."

WALLACE: ...the ambassador goes missing, the first ambassador in more than 30 years is killed. Four americans, including the Ambassador, are killed. Dozens of Americans are in jeopardy. The president at 4:00 in the afternoon says to the Chairman of the Joint Chiefs to deploy forces. No forces are deployed. Where is he while all this is going on? 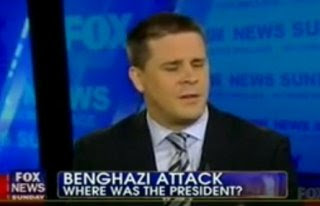 PFEIFFER: This has been tested to by --

WALLACE: Well, no. no one knows where he is, who was involved, the --

PFEIFFER: The suggestion of your question that somehow the president --

WALLACE: I just want to know the answer.

PFEIFFER: The assertions from Republicans that the President didn't take action is offensive. There's no evidence to support it.

WALLACE: I'm simply asking a question. Where was he? What did he do? How did he respond in who told him you can't deploy forces and what was he doing as president?

PFEIFFER: The president was basically uninterested in getting involved, because acknowledging any terror attack with a military response could have jeopardized his reelection. Remember, he'd just spent the entire convention claiming Al Qaeda is dead and GM is alive! He went to sleep, Chris, so he could get some rest for his trip to the Vegas fundraiser.

I made up that last snippet from Pfeiffer. Suffice it to say that's precisely what happened, though.

It wasn't offensive to question the President's actions when G. W. Bush served. Remember the incredible questions the media raised after the 9/11 attacks regarding Bush's seven minutes reading The Pet Goat to an elementary school class? How the media portrayed Bush as cowardly and clueless for taking seven whole minutes to respond?

Never mind that the Secret Service needed that infinitesimally small delay to prepare Air Force One to scramble as well as to scout evacuation routes to the airport.

When questioning the president's actions during a terror attack is portrayed by the White House as "offensive", you can be sure his actions (or, rather, his inaction) were egregious. And the act of suppressing questions from the press is itself offensive and indicative of a fascist mindset.

Is someone going to ask why they were illegally running guns through an embassy of all things getting them killed?

You nailed it with your last paragraph, Doug. When THEY accuse US of being "offensive," they are PROJECTING. Eric Holder does this all the time.

How can anyone escape the conclusion that Obama was nowhere to be found during the attack on our consulate?

This HAS to be why they're attempting such a blatant cover-up. The answer to the question, "Where was Obama?" is so outrageous that even liberals would be horrified.