WELL, WELL, WELL: It turns out JFK was a big admirer of Hitler

Praetorian media appears to have kept this particular tidbit a national secret for, oh, about the last half century or so. The national treasure Brent Bozell has the scoop. 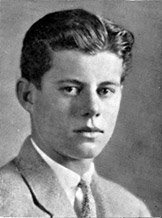 You won’t read about this in the mainstream media, of course, but they recently found a diary our former president kept in the 1930s and 1940s wherein he expresses admiration for Hitler and the “Nordic races.” Here’s what he said while traveling through Germany in 1937:

The towns are all charming which shows that the Nordic races appear to be definitely superior to their Latin counterparts. The Germans are really too good — that’s why people conspire against them…

After the war Kennedy was still a Hitler fan:

Anyone who has visited these places can imagine how in a few years, Hitler will emerge from the hate that now surrounds him and come to be regarded as one of the most significant figures that ever lived… He was made of the stuff of legends.

Perhaps that explains the rumored long-lost chapter of Profiles in Courage.

this and his affair with a german national was the reason he was sent to the pacific instead of the european theater like big brother Joe.

The Germans were/are good, but the Jews were/are better, so that's why they and the Arabs hate them.

Seriously, the Jews have contributed much more than any other group to society in science and morality.

It produces a nation and people continually at war with others and within themselves, that contradict the God they claim to serve.

There is also a Bush family secret love for Hitler and Nazism - In 1933, Senator Prescott Bush, father of GHWB, was an admirer and supporter of Hitler, and joined with a group of industrialists and bankers and sought the help of a military general to overthrow the US government and install a National Socialist regime. The general reneged and FDR compromised, made a deal with these the powerful (1%), that turned out to be the New Deal and America's entry into the socialist system began. (Story from BBC)

See Diana West's interview here for history of communist/socialist infiltration in US government and presidency since FDR:
http://dailycaller.com/2013/05/26/author-soviet-agents-subverted-us-in-1930s/

There is a separate segment on Benghazi - also an eye-opener.