Actual quotations or paraphrases from former speaker of the House, Nancy Pelosi (D-CA):

• Unemployment benefits are the best form of economic development.

• The IRS admission it illegally targeted conservative groups is the fault of the Supreme Court. 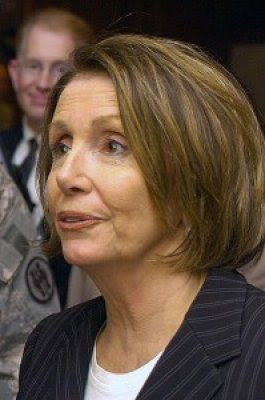 • ObamaCare is responsible for bringing down the deficit.

• We have to pass the bill (ObamaCare) to see what’s in it.

• The Tea Party is astroturf.

• Every week we don’t pass a Stimulus package, 500 million Americans lose their jobs.

• I believe in natural gas as a clean, cheap alternative to fossil fuels.

• We don’t have a spending problem.

• The CIA misleads us all the time.

• I didn’t know about torture. Bush tricked us. OK, I did know but I didn’t think it mattered because it worked, but now I’m definitely against it, although I didn’t know it was going on.

Editor's postscript: And to think, Pelosi is what passes for an intellectual in the modern Democrat Party.

She's a spouter of talking points to the most ignorant Americans.

But man, does it work.

In the party of people with no brains and big hearts, Nancy Pelosi is king with half a brain.