"Reject these voices that warn of... me"

Via The People's Cube: 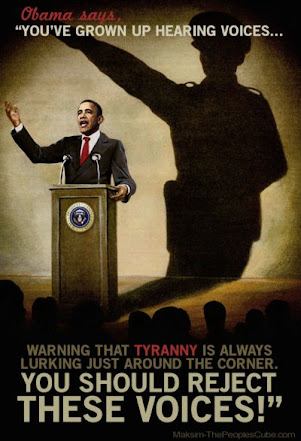 Last week, President Obama gave a commencement address to The Ohio State University. In his remarks, he urged graduates to reject voices warning about government tyranny.

"Unfortunately you've grown up hearing voices that incessantly warn of government as nothing more than some separate, sinister entity that's at the root of all of our problems. Some of these same voices do their best to gum up the works. They'll warn that tyranny is always lurking just around the corner. You should reject these voices. Because what they suggest is that our brave and creative and unique experiment in self rule is somehow just a sham with which we can't be trusted."

As a reminder of current Obama administration scandals:

-The DOJ monitoring dozens or hundreds of reporters

-Lies and cover-ups concerning the terror attack in Benghazi

That's right kids, you can totally trust Big Brother. Now move out into the world and ignore that "tyranny" thing.

Yes, kids: move out into the world and ignore that "tyranny" thing, from your parents' basement.

Unfortunately, they honestly haven't grown up hearing any voices. A few of them have become voices, but scattered echoes of things they don't truly understand yet. The option of no government is handily worse than even the worst of governments, as could easily be seen in France during her ugliest years.

Who, exactly, has been warning children about the government? The schools they are forced to attend, schools which have removed even the symbols of parental controls, inclusion? The propaganda that passes for text books? The "News"? Who? Their feral nature and 'lying eyes' are all that might save them, if I have little hope.

And Obama is such a nice guy, of course we can believe him -- and entrust him and his henchmen with unlimited power!