THE GENIUS OF DEMOCRAT LEADERSHIP: Illinois Credit Rating, Already Lowest Among the 57 States, Will Fall Further--Moody's

I could point out that Illinois is on the road to becoming a giant version of Detroit. But I won't. I'll simply point to this ominous report from Crain's Chicago Business.

Illinois' credit rating with Moody's Investors Service, already the lowest of any state, could fall if there is no legislative fix to address the state's huge public pension problem, an analyst at the credit rating agency said on Friday... "Our view is that failure to enact pension reforms could drive the state's general obligation bond rating lower from A2, which is already the lowest level for a U.S. state," said Moody's analyst Ted Hampton. 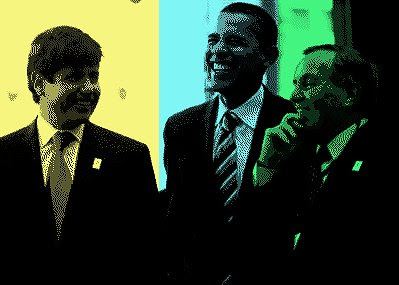 ...House Speaker Michael Madigan and Senate President John Cullerton are at odds over how to approach reform. Madigan's bill opts for unilateral cuts in retirement benefits for current and retired state workers, teachers, legislators, and college and university employees to reap the maximum cost savings.
Cullerton is pushing a bill passed by his chamber that would generally allow workers to retain access to state-sponsored healthcare in retirement if they opt for pension concessions.

Cullerton's plan, which has the backing of public labor unions, would shave the state's nearly $100 billion unfunded pension liability by only $9.13 billion. Madigan's bill, which the unions have vowed to challenge in court on constitutional grounds, would cut it by $21 billion, according to actuarial analyses by the state's pension funds.

...A lower credit rating would raise Illinois' cost for borrowing in the U.S. municipal bond market, where investors already demand hefty yields for the state's general obligation bonds... Illinois' so-called credit spread over Municipal Market Data's benchmark triple-A scale for the muni market was 140 basis points in the latest week. That is the second widest spread after Puerto Rico among major muni debt issuers tracked by MMD. The credit spread for California, which has taken steps to deal with its financial problems, is roughly a third the size of Illinois' at 46 basis points.

When the final collapse of the Illinois state government comes -- and it's when, not if -- the war between the public sector unions and their Democrat sponsors will truly be something to behold. The union rank-and-file will never, ever get all of the insanely rich benefits they were promised in exchange for their votes. And the Democrats will try to evade responsibility for the fiscal tsunami that they've unleashed on their voters.

When that happens, you can look for me here. I'll be the one making popcorn.

THE GENIUS OF DEMOCRAT LEADERSHIP: Illinois Credit Rating, Already Lowest Among the 57 States, Will Fall Further--Moody's
Well, this is the result of thuggery politics, which Illinois is famous for. Indeed, Obama and Emanuel learned well from Daley's political mafia. Unfortunately, corruption and graft can't bring money in, only expends it out, so we have finally reached the point where they are running out of other people's money. They are actually talking about raising taxes. That ought to make the dwindling number of residents, too poor to get out of Dodge very unhappy. More drugs, gangs and swag...the chief businesses of Chicago, which by he way, just closed 49 elementary schools. No problem, they were under attended, anyway. Chicago may well go the way of Detroit...another city drowning in Democratic politics and corruption.