NO ORDINARY SCANDAL: Join us May 21st at your local IRS office

Peggy Noonan at the Wall Street Journal calls it "No Ordinary Scandal". And she is right.

The reputation of the Obama White House has, among conservatives, gone from sketchy to sinister, and, among liberals, from unsatisfying to dangerous. No one likes what they're seeing. The Justice Department assault on the Associated Press and the ugly politicization of the Internal Revenue Service have left the administration's credibility deeply, probably irretrievably damaged. They don't look jerky now, they look dirty. The patina of high-mindedness the president enjoyed is gone.

Something big has shifted. The standing of the administration has changed. 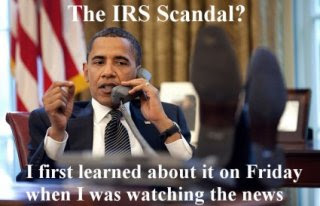 ...In order to suppress conservative groups—at first those with words like "Tea Party" and "Patriot" in their names, then including those that opposed ObamaCare or advanced the second amendment—the IRS demanded donor rolls, membership lists, data on all contributions, names of volunteers, the contents of all speeches made by members, Facebook FB -1.77% posts, minutes of all meetings, and copies of all materials handed out at gatherings. Among its questions: What are you thinking about? Did you ever think of running for office? Do you ever contact political figures? What are you reading?

...The second part of the scandal is the auditing of political activists who have opposed the administration. The Journal's Kim Strassel reported an Idaho businessman named Frank VanderSloot, who'd donated more than a million dollars to groups supporting Mitt Romney. He found himself last June, for the first time in 30 years, the target of IRS auditors. His wife and his business were also soon audited. Hal Scherz, a Georgia physician, also came to the government's attention. He told ABC News: "It is odd that nothing changed on my tax return and I was never audited until I publicly criticized ObamaCare." Franklin Graham, son of Billy, told Politico he believes his father was targeted. A conservative Catholic academic who has written for these pages faced questions about her meager freelance writing income. Many of these stories will come out, but not as many as there are. People are not only afraid of being audited, they're afraid of saying they were audited.

...All of these IRS actions took place in the years leading up to the 2012 election. They constitute the use of governmental power to intrude on the privacy and shackle the political freedom of American citizens. The purpose, obviously, was to overwhelm and intimidate—to kill the opposition, question by question and audit by audit.

...The White House is reported to be shellshocked at public reaction to the scandal... [But t]his is not about the usual partisan slugfest. This is about the integrity of our system of government and our ability to trust, which is to say our ability to function.

This administration must be brought to heel before things get any worse. And they will get worse unless the White House is taught a painful and public lesson in political action. Community organizing, as it were. Join us.

On behalf of Tea Party, Patriot groups, 9/12, liberty activists, and the American people, we are calling for anyone and everyone to protest the IRS’ complete abuse of power on Tuesday, May 21, 2013 at noon local time.


Right now we are determining the best locations to host these rallies, so please let us know if you are available to go and where you are located. We will use the information to identify the closest IRS offices so that we get the most patriots to each location.

Wanna be he was watching cartoons?