Surprize, Surprize!!!! China Has Plans of the Latest US Weapons Systems [Trevor Loudon]

This is no joke folks. This puts millions of lives at risk. Maybe even US national survival. From Russia Today:


The designs for more than two dozen major weapons systems used by the United States military have fallen into the hands of the Chinese, US Department of Defense officials say. 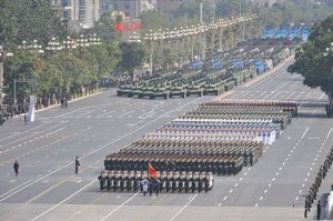 Blueprints for the Pentagon’s most advanced weaponry, including the Black Hawk helicopter and the brand new Littoral Combat Ship used by the Navy, have all been compromised, the Defense Science Board claims in a new confidential report.

The Washington Post acknowledged late Monday that they have seen a copy of the report and confirmed that the Chinese now have the know-how to emulate some of the Pentagon’s most sophisticated programs.

“This is billions of dollars of combat advantage for China,” a senior military official not authorized to speak on the record told Post reporters. “They’ve just saved themselves 25 years of research and development.”

“It’s nuts,” the source said of the report.

The Defense Science Board, a civilian advisory committee within the Pentagon, fell short of accusing the Chinese of stealing the designs. However, the Post’s report comes on the heels of formal condemnation courtesy of the DoD issued only earlier this month.

“In 2012, numerous computer systems around the world, including those owned by the US government, continued to be targeted for intrusions, some of which appear to be attributable directly to the Chinese government and military,” the Defense Department alleged in a previous report.

Ellen Nakashima, the Post reporter who detailed the DSB analysis this week, wrote that the computer systems at the Pentagon may not have necessarily been breached. Instead, rather, she suggested that the defense contractors who built these weapons programs have likely been subjected to a security breach. US officials speaking on condition of anonymity, she reported, said that a closed door meeting last year ended with evidence being presented of major defense contractors suffering from intrusions. When reached for comment, the largest defense contractors — Boeing, Lockheed Martin, Raytheon and Northrop Grumman — all refused to weigh in.

Chinese hackers have previously been accused of waging cyberattacks on a number of US entities, including billion-dollar corporations and governmental departments. In 2007 it was reported that China accumulated the blueprints for the Pentagon’s F-35 fighter jets, the most expensive weapons program ever created, but the latest news from the DSB decries that much more has been compromised.

According to the Post, the plans for the advanced Patriot missile system, an Army anti-ballistic program and a number of aircraft have all ended up in the hands of the Chinese. The result could mean the People’s Republic is working towards recreating the hallmarks of America’s military might for their own offensive purposes, while also putting China in a position where even the most advanced weaponry in the world won’t be able to withstand complex defensive capabilities once those projects are reverse engineered.

“If they got into the combat systems, it enables them to understand it to be able to jam it or otherwise disable it,” Winslow T. Wheeler, director of the Straus Military Reform Project at the Project on Government Oversight, told the Post. “If they’ve got into the basic algorithms for the missile and how they behave, somebody better get out a clean piece of paper and start to design all over again.”

Mandiant, a US security firm located outside of Washington, reported earlier this year that China has enlisted an elite squadron of cyber warrior to attack American computer systems and conduct espionage on behalf of the People’s Liberation Army. When the report was released in February, Mandiant said the PLA’s elusive Unit 61398 has successfully compromised the networks of more than 141 companies across 20 major industries, including Coca-Cola and a Canadian utility company. Those hacks reportedly subsided after Mandiant went public with their claims, but earlier this month the firm said those attacks have since been renewed.

“They dialed it back for a little while, though other groups that also wear uniforms didn’t even bother to do that,” CEO Kevin Mandia told the New York Times recently. “I think you have to view this as the new normal.”

On their part, China has adamantly denied all claims that they’ve waged attacks on US networks. Following Mandiant’s initial report, a spokesperson for China’s foreign ministry said the claims were “irresponsible and unprofessional.”

“Hacking attacks are transnational and anonymous,” Hong Lei said. “Determining their origins are extremely difficult. We don’t know how the evidence in this so-called report can be tenable.”

So much for the notion, popular in even some conservative circles, that China would never attack America, because “we owe them too much money.”

China has a huge social time bomb ticking. Millions of young men will never marry, because of the shortage of women caused by the “one child’ policy.

China’s Communist rulers know that those young men could turn on them, at a moments notice.

Firstly it would eliminate millions of troublesome young men. Secondly, the Chinese are confident it would deliver them the best substantial chunk of “living space” on the planet – the Continental United States. Siberia? Or California, Colorado, and the Carolinas? Which would you choose?

If any American seriously doesn’t think China is planning for a major war, please contact me. I own a bridge in New York that you might be interested in buying.

Well, nuke them now or fight them later. Which one will be bloodier?

Tell the ChiComs we owe them nothing anymore and walk away from the debt. Close their embassies and make them all leave the US.

I think the real scenario would be China selling these plans to Iran, Russia, or anyone else that will pay, or has resources that China wants.