On an annual trip to the Arctic, a Canadian scientist spotted some moss that had previously been frozen under glaciers for about 400 years. When she took the plant back to the lab, she wondered if it could be brought back to life. Yes, yes it could.

University of Alberta biologist Catherine La Farge and her colleagues go on annual trips to the Teardrop glacier on Ellesmere Island, located in the Canadian Arctic Archipelago.

In the past few years, she’s watched the glacier retreat, exposing rock, mud and ancient moss that had been buried under the ice since the Little Ice Age, which lasted from 1550 to 1850, Sheila Pratt reported in the Edmonton Journal.

La Farge specializes in studying ancient moss, a type of plant called bryophytes. Usually, the moss under the ice looks black and dead, but La Farge noticed some moss near the glacier retreat that was still slightly greenish. She decided to bring it back to the lab, and told the Edmonton Journal that upon closer inspection, she noticed a tiny green stem and decided to see whether the plant could be revived... 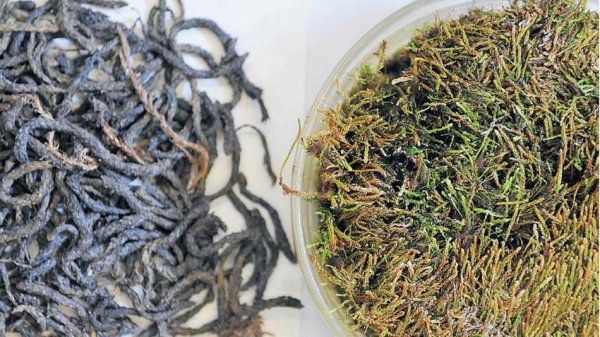 ...After being ground up and placed in petri dishes with potting soil for several weeks, some of the moss samples did indeed begin growing. A few months later, the dishes were full of the zombie moss. The results of La Farge’s scientific study with her University of Alberta colleagues was just published in the Proceedings of the National Academy of Science.

These are some super special plants. Unlike most land plants we know, bryophytes lack the vascular tissue that helps pump fluids around different parts of the organism, the BBC News reported. Instead, they reproduce by cloning their cells — and all you really need to keep it going is one.

The fact that these plants could come back after being frozen for hundreds of years has some intense implications. Scientists are studying bryophytes for potential medical use, and La Farge suggested sending some to Mars to see how the moss fares there.

I don't know about that "take the plants to Mars and let 'em grow" idea. The phrase unintended consequences seems explicitly designed for scenarios like that one.

This is proof-positive that Hillary Clinton can wait out the Benghazi scandal and run for president in 2020.