During his contentious testimony before the House Oversight Committee, former IRS commissioner Doug Shulman hemmed and hawed repeatedly when posed with the question: did the IRS itself investigate allegations of harassment and targeting of conservatives? 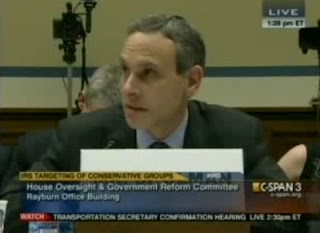 After nearly seven minutes, an exasperated Gowdy finally got to the bottom of it with this exchange:

Gowdy: Did you lift a finger to investigate the facts?

Shulman: Uh, I felt quite comfortable the Inspector General would run down the facts and...

And once he had it it would be recorded out.

Gowdy: Let the record reflect that's a 'no'.

So the record shows that Shulman said "no", he instigated no internal investigation of these criminal actions.

Because... it was revealed today that, indeed, the IRS did conduct an internal investigation and its results were withheld until after the election.

Tempers flared in a House Oversight and Government Reform Committee hearing Wednesday, with members on both sides of the aisle castigating the Internal Revenue Service for targeting conservative groups with special scrutiny, and then hiding the practice from Congress.

Rep. Darrel Issa, the committee's chairman, said that the committee learned just yesterday that the IRS completed its own investigation a year before a Treasury Department Inspector General report was completed.

But despite the IRS recognizing in May 2012 that its employees were treating right-wing groups differently from other organizations, Issa said, IRS personnel withheld those conclusions from legislators... 'Just yesterday the committee interviewed Holly Paz, the director of exempt organizations, rulings and agreements, division of the IRS,' Issa said. 'While a tremendous amount of attention is centered about the Inspector General's report, or investigation, the committee has learned from Ms. Paz that she in fact participated in an IRS internal investigation that concluded in May of 2012 - May 3 of 2012 - and found essentially the same thing that Mr. George found more than a year later.'

When the history books are written, Richard Nixon will look like a guy who stole a few boxes of Girl Scout cookies compared to Barack Obama.

This is the GOP's fight to lose.

Meaning, the GOP will lose it.

We need to concentrate with precision on booting out GOP RINOs, and putting in the likes of Ted Cruz.

If there is but one political target that we can zero in on that will make the greatest difference, it is John Boehner. Booting him out of the Speaker position would almost have the same effect as booting out Barack Obama.

Gowdy serves on the subcommittee on immigration ..whatever (I forget) for the judicial committee of the house.

I hope he gets this way when slamming the stupid Gang of Eight bill that will probably make it out of the Senate.

I don't know how other sites are seeing it, but the folks who comment at Scoops are well beyond tired of Rubio. The word "traitor" gets used a lot.

SHULMAN WAS A BUSH POLITICAL APPOINTEE AND I THINK THE PERMANENT BUREAUCRACY KEPT HIM IN THE DARK.

MILLER AND LERNER AND THEIR LEFTIST UNION THUG CRONIES DID NOT TELL HIM EVERYTHING.

DID YOU EVER SEE THE BRITISH SHOW, "YES, MINISTER"?

IT SHOWED HOW THE POLICICAL APPOINTEEE - THE MINISTER - WAS JUST A FIGUREHEAD.

THAT'S WHAT WE HAVE IN THE IRS AND IN OTHER AGENCIES AND DEPARTMENTS.

AND THE PERMANENT BUREAUCRACY IS NOT NEUTRAL POLITICIALLY.

EPA BUREAUCRATS ARE BIASED IN FAVOR OF "PRISTINE" NTURE (A FANTASY, AND AGAINST INSUTRY.

IRS BUREAUCRATS ARE BIASED IN FAVOR OF THE STATE AND AGAINST LIMITED GOVERNMENT.

STATE DEPARTMENT BUREAUCRATS ARE FOR APPEASEMENT AND DIPLOMACY AND AGAINST "THE BIG STICK".

THE GENERAL IDEA I THINK MOST PEOPLE HAVE - THAT THE BUREAUCRACY IS POLITICALLY NEUTRAL, AND DOES WHATEVER THE MAJORITY OR THE ADMINISTRATION WANTS - IS FALSE/WRONG.

Mr. Shulman did not say no. Mr. Gowdy lied and said Mr. Shulman said no. So, who is really lying in Mr. Gowdy's kangaroo court? Mr, Gowdy's questions were rhetorical in that he did not really wait for answers before he put words not said in Mr. Shulman's mouth "for the record". The only trap here is intrrapment.

Dear anonymous,
The IRS had completed an investigation before the election. When asked directly if the IRS had investigated, Shulman said in effect that he was waiting for the Inspector General to do it. That was not the truth, the whole truth and nothing but the truth. He evaded the truth by not giving a direct answer to a direct question. Under the circumstances of a Congressional investigation that is as much of a lie as boldly stating that they didn't do what they did do. He evaded the question with a lie and I say he should suffer the full brunt of a contempt of Congress charge.

All of which means nothing.

In the end, nothing will happen except that a few lowly government employees will get tossed under the bus and replaced by new ones.


Dear arnonerik, you said...
The IRS had completed an investigation before the election. When asked directly if the IRS had investigated, Shulman said in effect that he was waiting for the Inspector General to do it. That was not the truth, the whole truth and nothing but the truth. He evaded the truth by not giving a direct answer to a direct question.
Actually, you misquote Mr. Gowdy's question. The question was to Mr. Shulman, "What did you do, Mr. Shulman, about it?". Obviously, if there was an internal IRS audit/investigation, Mr. Shulman did not initiate it, or he would have stated this as a fact. However, since he personally did not initiate the internal audit, does not mean he lied. To the contrary, you means you, not IRS. Additionally, you state the results of the IRS internal audit/investigation were preliminary of the IG's independent audit. Therefore, it would have been unwise for Mr. Shulman, a political appointee, to interfere with an ongoing IG audit. Also, Mr. Shulman had been assured that in addition to the ongoing IG audit, corrective action had been taken, and the IRS audit he was told was not politically motivated. Mr. arnonerik, you may not like Mr. Shulman's answers, or reasoning, but I see no lie. The only lie in the exchange was from Mr. Gowdy. When Mr. Gowdy did not like Mr. Shulman's answers, he rudely, interrupted Mr. Shulman and falsely,said Mr. Shulman said "no", when he clearly, did not say "no". I ask you, did he say no? And even if he did, what was he saying no to that would even matter, or be criminal? Let's stay focused here on the substance.