I suppose being the lowest-rated cable "news" network in history is extra motivation for covering the real news.

It's safe to say that behind the scenes Democrats are in full-blown panic mode. 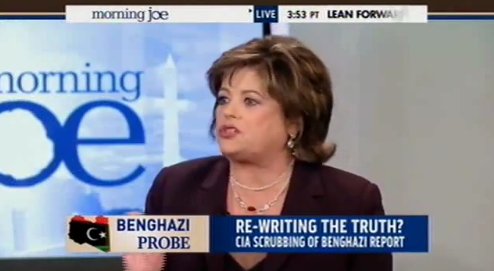 NBC's Lisa Myers, in a panel discussion on MSNBC, revealed: "There is something called Benghazi going on, and I think the Democrats now are starting to worry about it. It's started. I got calls from a number of Democrats yesterday trying to undermine Greg Hicks’s testimony, saying he wasn’t demoted. So I think they feel that some damage was done by those three witnesses on Wednesday."

Myers was interviewed before the blockbuster revelation by ABC News that the State Department and/or the White House lied about the Benghazi assassinations.

I surmise the reason that the White House was behind the release of the email revision history: Obama wants no taint to his legacy (such as it is) and if Hillary Clinton needs to suck it up, so be it.

I am surprised Dems are in a panic over this. Unless I don't understand Dem voters, I have to think that this is no real issue for them. While it won't bring conservatives in I'm not sure it will push Dems out. Even the middling independents don't really seem to care. It's mostly about jobs. Heck, they don't even seem to care that small business ownership is cratering. Well, unless they start connecting it with job losses.

I just don't see how this will be big issue for Dems. I could be wrong but I don't see it. Obamacare, amnesty, things like that if people think those will affect their job prospects, depth of career, and such, but not Dems letting one of their own take a hit. Just another bureaucrat, and if he were still alive, a controversial one. Bleh.

Then again, maybe there are things still potentially to come out, or which have been found out and are being quietly used, that have more mojo?