If Your First Reaction to a Catastrophic Tornado is to Politicize Its Victims, You Might Be a Sick and Twisted Leftist 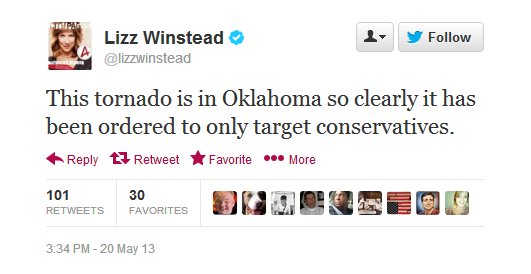 These Leftists are the lowest of the low.

In Eichenwald's case, he knows that conservatives opposed not the $17 billion Sandy relief bill, but the additional $33 billion in pork that included such necessities as:

Everything with the Left is to be twisted to some partisan advantage, no matter how awful, tragic or unlawful.

I feel like we're living in early 1930's Germany, a state in which faith, traditions, and morals were sacrificed at the altar of an all-powerful central government. And we know how that ended up, eh, Eichenputz? But apparently that lesson is too complicated for the "editors" at "Vanity Fair" as well as the rest of the modern Democrat Party.

Scum is a really nice term for these Low Life Liberals. If not GOP or Global warming-- It has to be G W Bush's fault.

'Politicizing?' This is flat out violence, and it exposes the sickness inherent in these people.

Imagine what they'd do to you if they had you behind barbed wire. Look to the Holocaust for a clue.

We have got to fight back against these peoples' hijacking of our government, media and education systems. Unless you look forward to being behind barbed wire.

Just typical, empty-lived Fascists, Doug. They feed off the misery of those they consider their enemies. Sad.