THE IRS-OFA SCANDAL WIDENS: Lies, Cover-Ups and a Full-Fledged Assault on Free Speech and... Prayer

Like an iceberg beginning to surface, the lawless activities of the IRS-OFA are becoming more and more obvious every day. Conservatives, Jews, Hispanics, Catholics, and Pro-Life groups in general appear to have been harassed, intimidated and humiliated.

As a reward for this criminal behavior, the former head of the IRS' tax-exempt division now leads the agency's ObamaCare enforcement arm.

MSNBC, of all places, revealed this morning that the IRS covered up its unlawful activities prior to the election: 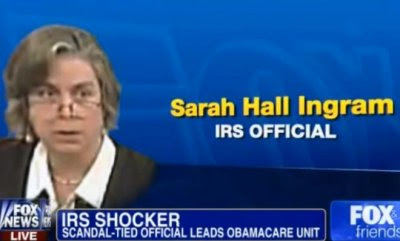 The IRS commissioner "has known for at least a year that this was going on," said Myers, "and that this had happened. And did he share any of that information with the White House? But even more importantly, Congress is going to ask him, why did you mislead us for an entire year? Members of Congress were saying conservatives are being targeted. What's going on here? The IRS denied it. Then when -- after these officials are briefed by the IG that this is going on, they don't disclose it. In fact, the commissioner sent a letter to Congress in September on this subject and did not reveal this. Imagine if we -- if you can -- what would have happened if this fact came out in September 2012, in the middle of a presidential election? The terrain would have looked very different."

And contrary to the president's standard assertion ("I only found out about this yesterday on the news"), Obama's Chief of Staff was aware of the IRS investigation last year:

Treasury Secretary Jack Lew said today that he was aware in the fall of 2012 of the Treasury inspector general probe of the IRS targeting of conservative groups, but he claims he did not know the details of the investigation... Even if ... he was not aware of details, It’s not clear why Lew, as White House chief of staff, did not seek more information about such a potentially explosive matter as the IRS singling out the president’s opponents for special scrutiny.

Additional reports say that the IRS asked Tea Party groups for access to their websites:

There would be only one reason to request back-end access to a Tea Party group's website: to intimidate it from expressing it First Amendment rights to free speech.

And it gets better: the IRS is said to have asked pro-life group about 'the content of their prayers':

“Their question, specifically asked from the IRS to the Coalition for Life of Iowa: ‘Please detail the content of the members of your organization’s prayers,’" Schock declared.


We need a special prosecutor. And we need one yesterday.

There is traditional morality, then there is the morality of those in power, one ring, to rule over all.

The 14th amendment covers "equal protection under the law"

How can the IRS say there was nothing illegal done as they select who will be treated fairly and those not.

We do NOT want a special prosecutor.

This scandal is enormous in scope. No one man or one team can investigate it all in timely fashion.

The House of Representatives can muster dozens of committees holding hearings daily on different aspects of the scandal. Remember, so far 471 conservative groups were targeted plus many more individuals, including donors, and many more we don't know about.

We must use dozens of committeess and hundreds of subpoenas and do it all in the light of day.

Congressman can comment every day. We can watch the witnesses in hearings testify.

We must resist all calls for a special prosecutor and any other procedure that will limit the scope and public nature of the investigation.

Actually, I feel that Congress should be investigated for allowing these tax exempt organizations to exist without oversight. It is pretty obvious that their sole purpose is political. They claim to be informational organizations. How does the IRS police these applications? Either one political party or another will plead their case that they are being targeted. Do away with these tax breaks. If people really want to influence elections, don't give them tax breaks to do so.