By the beard of Zeus, CNN has beclowned itself during this election cycle

Dave forwards a note he sent to CNN about this piece of drek disguised as a news article:

There are several errors of omission and comission in this piece: 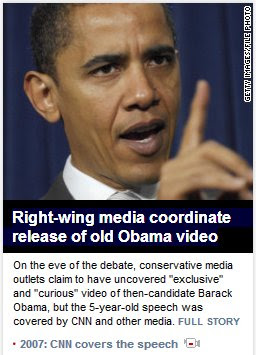 • The full tape had never been released. In fact, only 9 minutes of the 40 minute speech had ever been seen publicly before this story broke. There are also a variety of inflammatory remarks by Obama that had before been reported (stealing from the suburbs to give to the cities; praise for the virulent anti-semite Rev. Wright, who he had just repudiated; etc.).

I would appreciate your perspective on this obviously biased article and headline.

Don't hold your breath waiting for an answer, Dave. Unless you're being driven around Martha's Vineyard by a member of the Kennedy clan.

It's really nice that your sacrificing yourself monitoring CNN, Doug. Where were you able to find it - on a TV in a nursing home common lobby?
R.B. Phillips

I remember some Obama flak on FNC denounce this as a "desperate attempt by the Romney campaign to distract from his '47%' video."

I remember thinking, "Which was your desperate attempt to distract from Benghazi debacle."

I suspect Team Obama had been sitting on that for some time, had intended on releasing it later, but felt the distraction was needed then.

The tape released this week was from June 2007. Obama didn't repudiate Jeremiah Wright until almost a year later.

Is the word "not" missing?