ALLRED VS. TRUMP: Battle of the October Surprises

If it's October in an election year, you can be sure that Democrats are unsealing "sealed" court records to tar their opponents. Remember the 2004 Senate race in which Obama's henchmen unsealed the "sealed" divorce proceedings of multiple opponents?

This year liberal crackpot and professional embarrassment Gloria Allred has stepped up to act as the designated Axelrod proxy in a last-ditch effort to salvage the sinking Obama campaign: 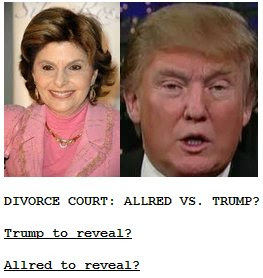 ...Gloria Allred will be in a Boston area courtroom Wednesday in an attempt to unseal the sworn testimony given by Republican Presidential hopeful Mitt Romney, in a prior court case...

"The Boston Globe is headed to court tomorrow morning for an emergency hearing in an attempt to obtain a court order to unseal the sworn testimony given by Mitt Romney in a prior court case and to lift a gag order so that the parties can speak about Romney. Gloria Allred will be in court representing one of the parties in the case..."

The emergency hearing will take place at the Norfolk Probate & Family Court in Canton, Massachusetts, and Justice Jennifer Ulwick will oversee the proceedings which will begin at 9 a.m. EST.

But you can tell that Obama's opposition isn't at the McCain level of incompetence:

HIgh above the Alps my Gnome has heard that Donald Trump will announce that he has unearthed divorce papers between the Prez and his wife.

Starring Donald Trump as the anti-Allred! London's Daily Mail seems to have a preview:

Donald Trump is to claim that he has unearthed divorce papers of Michelle Obama and the President, according to a respected financial pundit with links to the tycoon.

It is alleged that the eccentric real estate mogul will claim that the documents show the First Lady and the President were at one point in their two decades of marriage seriously considering splitting up.

Everyone is waiting for October Surprises to be unloaded on Romney.

The Obama campaign and its supporters are desperate, and that desperation will reach a fevered pitch this weekend if Obama doesn’t get a meaningful bounce out of last night’s debate. Few are predicting he will.

I consider this a shot across the bow, a way of letting Obama and a certain female attorney supporter of his in California know that it’s not going to be Meg Whitman again. There will be push back.

The Romney campaign will go there without going there itself.

In the event of offsetting embarrassments, the election goes on.