These $42,000 Crony Clown Cars just keep getting better and better.

Chevrolet is presently reaching out in a “customer service program” alerting owners of 2013 model year Volts that their car is eligible for a free software upgrade to fix a possible anomaly that could cause the car to shut down...

“Apparently the steering and brakes will still work, but you have to safely coast to a stop, turn the car off and then power it up again 2-5 minutes later,” wrote 1RiverMan1, “She indicated that the solution was a software update and I should take the car in as soon as possible. The update takes about an hour. If you have not had this message yet, check with your dealer. 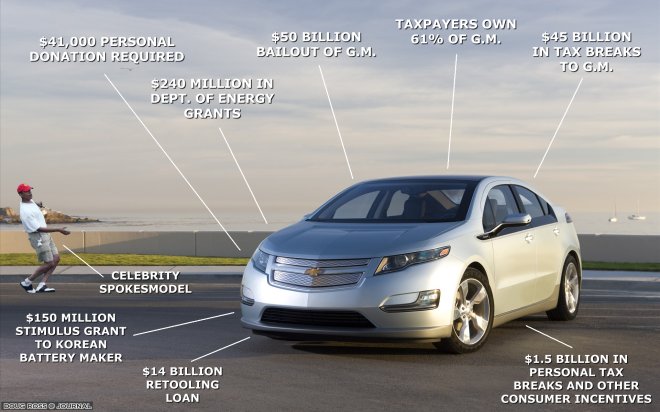 GM has not used the term “safety issue,” but whether it could become one could be anyone's guess if a 2013 Volt's power spontaneously shut off – albeit with brakes and steering still operative – in the middle of heavy vehicle traffic. No accidents to date have been reported to have occurred, nor have Volt owners expressed much concern that they could.

But if you have a 2013 Volt, it is probably better not to delay the software update.

I'm just trying to imagine what else can go wrong with the Volt. Maybe the seat-belts will malfunction, locking drivers into their seats while accelerating off cliffs.