You can feel the excitement. It's palpable.

...speaking of rallies, this was Romney's in Virginia last night: 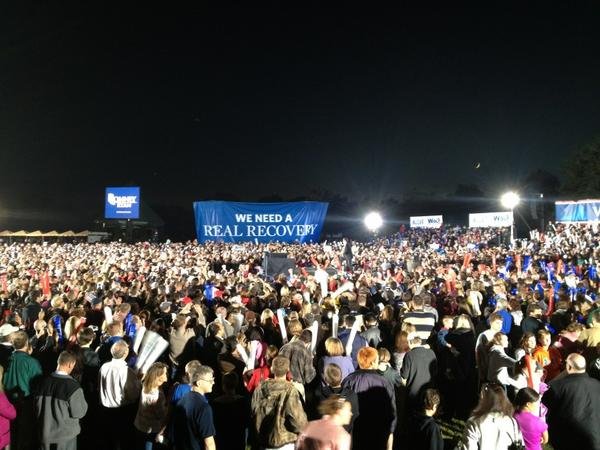 ...the Obama campaign resembles nothing so much as John McCain's did at this point in 2008 -- aware of its pending defeat, but struggling on and hoping for some enormous "game changer" to arrive... [Romney's] edge is so great --and the early voting during these weeks of Romney ascendancy so significant-- that the president knows and his inner circle knows there is defeat ahead...

Which means the last debate will be even more off-putting than the last two as a desperate incumbent again tries to make up for the lack of a record on which to run, and the failure to develop anything resembling a second term agenda. Too late for that as well.

Turns out the "brain trust" in Chicago didn't have that many brains and ought not to have been trusted.

And one reminder: take nothing for granted. Whether you live in a pure Red State, a pure Blue State, or anything in between:

• Vote and get everyone you know who supports liberty to vote.
• Vote the straight Republican ticket.
• Every radical Leftist Democrat must be fired with extreme prejudice.

Because if we are to repeal Obamacare, we must take not only the Presidency, but hold the House and take the Senate as well. It's time to rally everyone you know. Let's make this a moment we'll tell our kids and grandkids about.

What about the electoral college? Can the popular vote change their vote/minds? Especially if we know the state is blue...how can that work?

The only electoral votes you can guarantee blue are from DC. Otherwise, we don't know the state is blue.

Back in the 1984 election, with 92% of media coverage for Reagan in the negative, people knew a bunch of stuff that just wasn't true.

If just one percent of conservatives from Minnesota had convinced just one person to go out and vote, Reagan would have taken every state except DC.