ONCE IN A WHILE HE BLURTS OUT THE TRUTH: Bill Clinton admits the economy is broken

Well, this won't help the ever-widening rift between the Clinton clan and Barack Obama.

Governor Romney's argument is, we're not fixed, so fire him and put me in. It is true we're not fixed. When President Obama looked into the eyes of that man who said in the debate, I had so much hope four years ago and I don't now, I thought he was going to cry. Because he knows that it's not fixed. 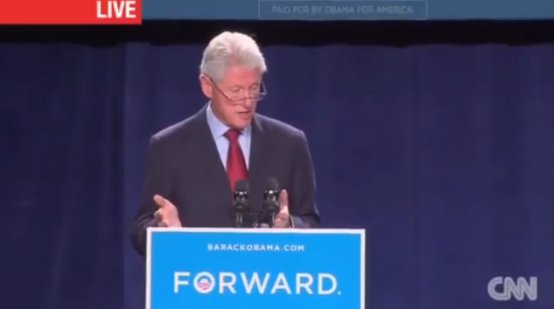 ...A Romney spokesman comments: "We agree with former President Bill Clinton. The economy has not been fixed under President Barack Obama. Today, more than 23 million Americans are struggling for work, poverty has increased and food stamps are at record levels. Mitt Romney believes we can do better by creating 12 million new jobs with higher take-home pay, cutting spending to put our nation on course for a balanced budget, and actually fixing our economy."