HadCRUT is the United Nations' gold-standard for the measurement of global temperatures. The data-set proves that over the last 15 years (180 months) the Earth has cooled, not warmed as predicted.

HadCRUT released their latest global temperature dataset today, which confirmed what both NOAA and NASA reported earlier this month - that global temps declined during July 2012. 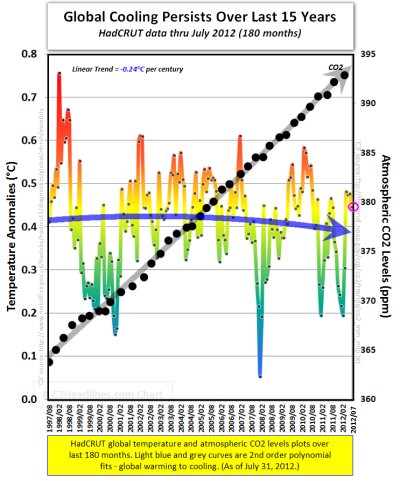 In addition, the plot of the HadCRUT and CO2 data for the last 15 years, through July 2012, is very revealing.

Contrary to what the mainstream press reports and exaggerates about "global warming," the world has actually been in a stable-to-cooling phase since the El Nino temperature spike of 1997/98.

Of course, if the NYTimes or WAPO or CNN or CBS or the AP were ever to report the actual cooling trend over the last 15 years (despite the massive amounts of human CO2 emissions) this would establish that they have been grossly misleading the public for years about consensus "global warming."

And as the press fully realize, the public that primarily relies on traditional media outlets are extremely gullible with little intellectual curiosity. Thus the media gets away with hysterical fear-mongering, half-truths and deceptions.

Conclusion: Long story short - human CO2 emissions are not causing rapid, accelerating global warming, per the IPCC's favored HadCRUT temperature dataset. Over the last 15 years, global temperatures have been relatively stable, with a slight global cooling trend being exhibited. All the IPCC's and NOAA's climate experts, their climate models and the professional doomsayers have been absolutely wrong about their catastrophic climate predictions, for over a decade now - and not a single mainstream press outlet reports this. Solid advice to gullible: don't believe anything the mainstream press outlets "report."

In a curious semi-coincidence, the invaluable Anthony Watts relays word that over 2000 new low temperature records were set in October. 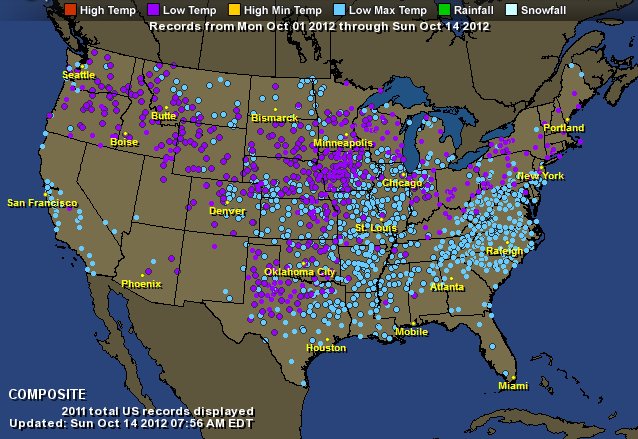 Once again, if this had been summer, and the numbers reversed, you’d see Seth Borenstein writing articles for AP telling us this is ‘what global warming looks like’. So far not a peep out of Seth on this cold wave and what it is supposed to mean.

But nothing -- not facts, logic, reason or science -- can dissuade the Eco-Statists from their plans to de-industrialize America. Or the hacks at the Dissociative Press and the rest of antique media from spreading their destructive lies.

Which is why we need to flush the Democrat Party from office in November -- at every level of government.