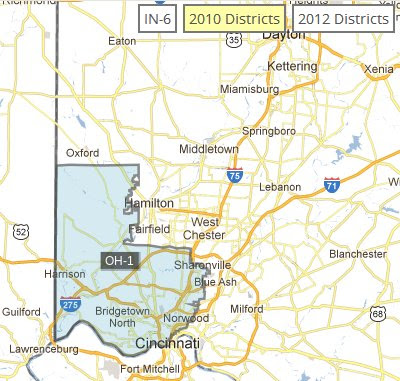 Why is Hamilton such a bellwether? Consider the 2008 election, when Barack Obama won the state 51.2 percent to 47.2 over John McCain.

Hamilton County was the largest county in Ohio to model almost the exact 2008 statewide result, with Obama capturing 52.0 percent versus McCain's 47.0. Montgomery County, home to the city of Dayton, also modeled the 2008 result with a 52.0 to 47.0 margin, but is substantially smaller than Hamilton County.

In 2008, the Ohio District 1 House race pitted Steve Driehaus against incumbent Republican Steve Chabot. Driehaus won by a margin of 3 points, a spread nearly identical to that of Obama at 51.5 to 48.5.

But in 2010, Chabot -- with the rise of the Tea Party -- won his seat back from Driehaus by 5 points, 51.5 to 46.0. To be clear, Chabot was not a popular choice among fiscal conservatives; but the rage against Driehaus -- regarding Obamacare and the rest of the Obama agenda -- was sufficient to reverse the 2008 results with a swing of 8.5 points.

In 2008 and 2010, Ohio's District 1 represented the west side of Hamilton County -- and the west side of Cincinnati itself -- and consisted of a mix of urban, suburban and even rural voters (it has since been redistricted, so it won't be an apples-to-apples comparison). Yet the anger with Obama's agenda was sufficient enough to turn OH-1 from D+3.0 to R+5.5 between 2008 and 2010.

Did the Tea Party go away since 2010? Is the economy notably improved? Has Constitutional Conservatism disappeared? Is the world a safer place? Is Obamacare suddenly popular now?

I think it's safe to say that all five questions can be answered with the word "no".

Ohio represents a make-or-break state for both campaigns. And Hamilton County is the bellwether for the state, if the experts are to be believed. Using the 2010 results, Ohio's old District 1 very well could be a lock for Mitt Romney. And if the old OH-1 results hold, Mitt Romney is going to win Ohio by a very safe margin. I'm not in the prediction business, but I'll put a guesstimate in the comments.


at 11:55 AM
Email ThisBlogThis!Share to TwitterShare to FacebookShare to Pinterest
Labels: Democrats, Obama, Protecting America, Romney

My guesstimate: Romney wins Ohio by 3, plus or minus 0.5.

OBAMA IS LESS POPULAR NOW THAN IN 2010, AND MITT'S APPEAL SPANS THE TEA PARTY AND INDEPENDENTS.

Both my daughters went to Miami of Ohio, even though we live in Colorado. That school has a strong Republican base of students working to help Republicans in elections. They still have influence on Hamilton County.

My Guess: Ohio for Romney by 4+ percent.

You do not win independents by double digits and not win Ohio.

the PPP Poll has Obama barely making it by 1% which is well within the margin of error. This is assuming a Dem+8 turnout... which in light of what's going on is seriously unrealistic.

In 2008 Ohio had a Dem +5 turnout. That was the wave election that sent Obama into office. Dem+5 turnout in 2012 = A close Romney win according to this poll.

I've been saying for a couple of weeks now that Romney will win Ohio by 6%. I'm thinking of adjusting that upward.

I'm thinking that Ohio is going to give me an ulcer on election night unless Romney surges enough to pick up a state like PA or MI, thus ending the night early. Also, I want Romney to win Ohio outside the margin of fraud. No bullshit endless recounts until Barry magically pulls ahead.

I'm still bullish on Romney. I think anything more than a couple of points is crazy but I have my rationale posted here.....

I am typing this from Hamilton County:

Can't agree more about the surprise win of Chabot over Driehous in 2010, and what that means for this election.

Further, Hamilton County was the scene of the absolute FIRST tea party - on March 15, 2009. Less that 2 months after our dear leader took office, the people of Hamilton County saw him for what he is: a determined leftist. That tea party was full of signs with references to socialism and communism, quite telling as most gave him the benefit of doubt until later commie moves like ObamaCare.

One other sign - we've seen a lot less Obama stickers since that first debate.

I'll be biting my nails until the results come in, but there is enough data to suggest these voters will not disappoint.

i think this post doesn't make any sense because lake county is the true bellwether county for the state of ohio and has been that way since 1964. so really so lake county goes so ohio goes. i have proudly lived in lake county my whole life and i will be voting romney