I'd somehow missed this open letter from Investors Business Daily to FLOTUS ("Memo To Michelle: What A 'Huge Recovery' Looks Like"), but happened upon it thanks to a review of the comprehensive story rolodex at Instapundit:

Michelle Obama recently described this recovery as "huge." Maybe she forgot what decade it is. The Reagan recovery in the '80s was huge. But the one her husband's policies have given us? Not so much. 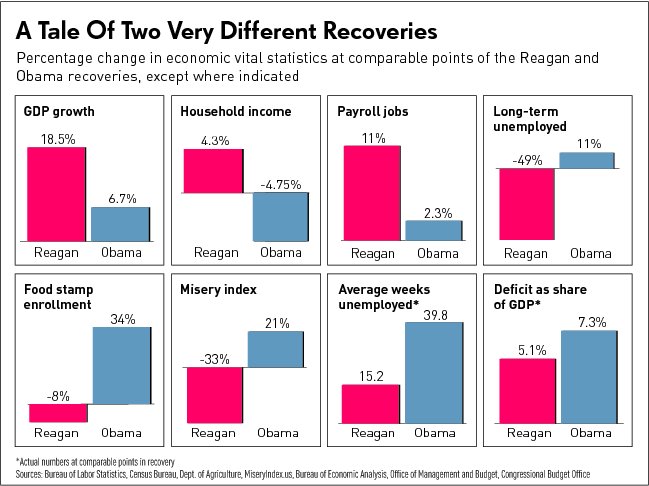 Indeed, had Obama's recovery merely been average, there would be about 8 million more people with jobs today, and the GDP would be $1.2 trillion bigger.

If you want to see what a really huge recovery looks like, take a look at the one President Reagan oversaw. He entered office in January 1981 amid an economy mired in malaise, with inflation out of control, unemployment high and rising, a decade-long energy crisis and sky-high interest rates...

Obama, in contrast, has gone in almost precisely the opposite direction — temporary, targeted tax cuts; huge new spending; vast new regulations — and he threatens more of the same, plus a $1 trillion tax hike, if he were to get a second term.

Indeed, in last night's debate, Obama has promised just that: more crony capitalism in the form of "green energy" programs and more failed Stimulus for "roads and bridges". Einstein's definition of insanity applies perfectly in this situation.

Another article to share with friends that say it a whole lot better than I could. Thanks!