Hey, beatnik: need more proof that the only way to deter tyrants and preserve peace is through strength?

Large-scale exercises of the Strategic Nuclear Forces under the command of President Vladimir Putin have completed in Russia, the president’s press-secretary Dmitri Peskov reports. 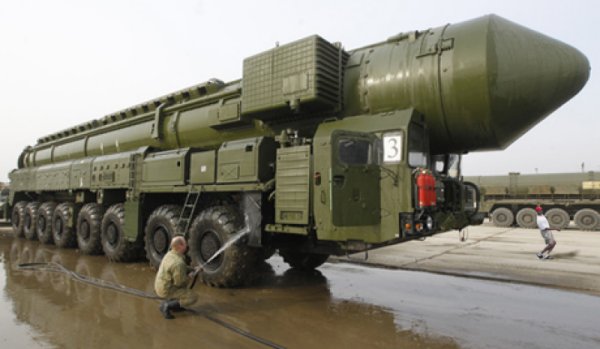 He says that these were the first nuclear force exercises on such a large scale in Russia’s modern history.

On Friday, a Topol intercontinental ballistic missile was successfully launched from the Plesetsk cosmodrome in the Arkhangelsk Region.

Also on Friday, The Svyatoy Georgiy Pobedonosets nuclear-powered ballistic missile submarine of the Pacific Fleet launched a ballistic missile from the Sea of Okhotsk to the Chizha testing ground in the north of European Russia and Tupolev-95 and Tupolev-160 strategic bombers launched four missiles to the Pemboi testing site in the Urals Region.

Pemboi has also become the site where the Russian troops for the first time successfully hit a cruise missile with the Pantsir-S surface-to-air missile and anti-aircraft artillery weapon systems of the latest generation (the NATO name SA-22 Greyhound).

Gee, that Hillary Clinton is doing a swell job, ain't she?

Consider this reason seventy bajillion proving that Democrats remain The Party of Weakness and Appeasement.

And weakness invites war, which is the course this administration has set for America.

Mitt Romney was completely, utterly correct when he named Russia a primary geopolitical foe. It is arming Iran and once again threatening its neighbors. None of its strategies, perforce, are intended to do anything but harm the interests of the United States.