HEADLINE O' THE DAY: Yep, the Science Is Settled

Last week The Mail on Sunday provoked an international storm by publishing a new official world temperature graph showing there has been no global warming since 1997... The figures came from a database called Hadcrut 4 and were issued by the Met Office and the Climatic Research Unit (CRU) at East Anglia University.

But the Met Office, whose lead was then followed by climate change campaigners, accused The Mail on Sunday of cherry-picking data in order to mislead readers. It even claimed it had not released a ‘report’, as we had stated, although it put out the figures from which we drew our graph ten days ago. 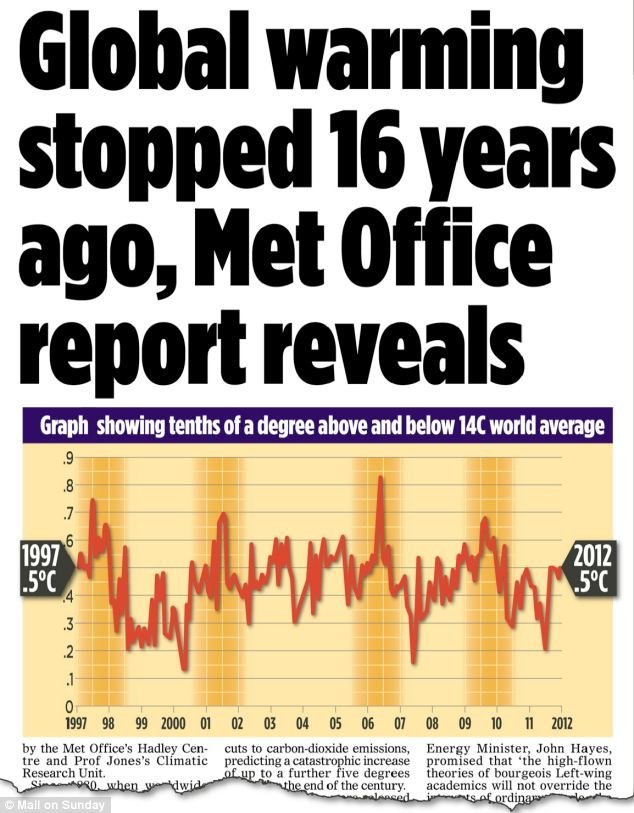 Another critic said that climate expert Professor Judith Curry had protested at the way she was represented in our report. However, Professor Curry, a former US National Research Council Climate Research Committee member and the author of more than 190 peer-reviewed papers, responded: ‘A note to defenders of the idea that the planet has been warming for the past 16 years. Raise the level of your game. Nothing in the Met Office’s statement .  .  . effectively refutes Mr Rose’s argument that there has been no increase in the global average surface temperature for the past 16 years... ‘Use this as an opportunity to communicate honestly with the public about what we know and what we don’t know about climate change. Take a lesson from other scientists who acknowledge the “pause”.’

The Met Office now confirms on its climate blog that no significant warming has occurred recently: ‘We agree with Mr Rose that there has only been a very small amount of warming in the 21st Century.’

In other words, all of the monstrous social engineering programs, the takeover of industrial policy-setting, and the rest of the hysteria fomented by the Eco-Statists -- and especially the Leftist kooks at the EPA -- are completely, utterly groundless.

There's no global warming occurring on this planet.

Which, by my count, is reason 6 kajillion that this administration must be removed from office in November. And, if you're an Eco-Kook reading along, remember: election day is always the first Wednesday in November.

Is the earth getting warmer? From a 2nd Law of Thermodynamics standpoint, sure it is. Is man-made warming responsible for some of it? Sure, for the same reason. Is the man-made contribution larger than a cow fart in a hurricane? Nope, and it's probably smaller.

I find it laughable that the environmentalists first called it "Global Warming", and then "Climate Change" after their conspiracy was uncovered: Eventually they will find a word or phase that a majority will buy into (like, "Occasional Warming") and then proclaim "Global Warming" existed all along!