FLOTUS DOES HENNY YOUNGMAN: Michelle Obama Says ‘We Are in the Midst of a Huge Recovery’

Oh. You mean to say she was trying to be serious? 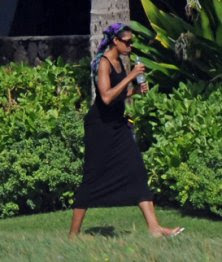 First Lady Michelle Obama said in a radio interview on Friday that the United States is in the “midst of a huge recovery” because of what “this president has done.”

Pablo Sato, co-host of Pablo & Free on WPGC 95.5, a Washington, D.C.-area hip-hop radio station, asked the first lady: “Mrs. Obama, you know what, in your words, tell us what you think the state of the union is in right now?”

Mrs. Obama said, “I mean, we are seeing right now that we are in the midst of a huge recovery. Right? Because of what this president has done.”

...According to the Bureau of Economic Analysis (BEA), the real gross domestic product (GDP) increased by 1.3 percent in the second quarter of 2012, down from 2.0 percent from first quarter 2012. 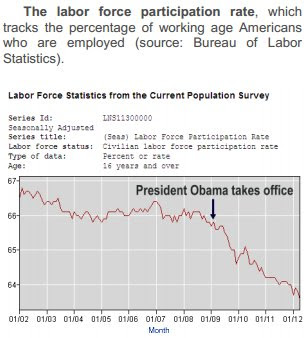 • A record high 1-in-6 Americans are living in poverty.

• A record high 48 million Americans are on food stamps.

• The labor force participation rate is at a 30-year low.

• Democrats have stolen $500 billion from Medicare to fund a new, completely undefined entitlement program the costs of which have already tripled from original estimates.

• Barack Obama has added $6 trillion to the debt in only four years with no plans to reduce the yawning chasm facing future generations.

Oh, and she called many of her supporters' family members and friends "knuckleads":

First lady Michelle Obama is encouraging supporters to reach out to the "knuckleheads" in their life to ask them to vote for President Obama... "Talk to everyone you know -- your friends, your neighbors, that cousin you haven't seen in a while, that student sitting next to you in class. You know he's kind of a knucklehead," the first lady said. "You know the one."

"Tap him on the shoulder. Be nice. Don't call him a knucklehead. Not to his face. You just want to encourage him to get to the polls," Obama said. "But tell him what's at stake."

Michelle, however, may be right about that recovery.

We're about to evict her and her husband from the White House and install leadership that understands the Declaration of Independence and the Constitution. I call that a recovery.

God! The woman has the vocabulary of a 13 year old

Did she really say not to call the guy a knucklehead to his face so he doesn't become angry. Is she openly advocating for blatant hipocracy? Well yeah, I guess she is, no surprise there.