The Quote is Fake But the Schedule is Real 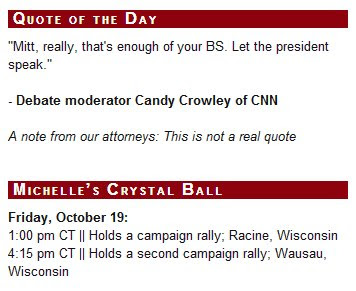 Say, wasn't Wisconsin supposed to be a Blue State and locked up for Obama? *

At HillBuzz, Kevin DuJan's assessment yesterday aligns with the increasingly defensive nature of the Obama campaign:

As I write this, Democrats are moving the firewalls back into uncharted territory. The Obama campaign has already abandoned North Carolina…and Virginia and Florida are next. Mitt Romney is going to win all three of these states. Surprisingly, as of today, Obama’s also given up completely on Colorado too. I think the Frank Luntz focus groups in Las Vegas after the second debate are a good indication that Nevada is lost to Obama as well. The political maps are still giving New Mexico to Democrats but I have a hard time buying that... I think Governor Susana Martinez will deliver her state to Romney in the end.

My own home state of Ohio is not a tossup. I’ve written before that the thing you need to know about Ohio is that is has correctly voted with the winner of the presidential race in every election since 1960. Ohioans vote with the zeitgeist…and that energy is all going towards Mitt Romney. Ohio, the heart of it all, the Buckeye State, will be in Romney’s column just under three weeks from now.

That means Democrats’ new firewall of defense against a complete and total blowout are pushed back to Michigan, Pennsylvania, and Wisconsin.

Hey, could one of you guys do me a favor and check up on Nate Silver and make sure he's okay?