DUJAN: Proof That the Obama Campaign Has Silently Admitted Defeat

I’ve written before about the fact that Barack Obama was not planning another big Election Night victory party in Grant Park here in Chicago like the spectacle he put on in 2008, because no one I know in the Parks Department or in the event planning community had anything on their radar for Grant Park that night.

Because of the permitting and union rules that plague any event in this City (which wouldn’t be waived even for Obama, due to liability and insurance issues the City would face if anything went wrong and permitting was not followed to the “T”) we would have known a few weeks ago if Obama expected another win and was going to celebrate in Chicago again. That massive Grant Park victory rally took a while to plan and involved far too many vendors for anything similar to be replicated this year without people already knowing.

I’ve suspected for some time that Obama was going to plan for a concession speech on November 6th, but last night final confirmation arrived in the form of leaked news that the Obama election night event is being staged in private McCormick Place, not a big public setting like Grant Park.

Let me put this as clearly as I can because it’s crucial: if Democrats really thought Barack Obama was going to be reelected, then they would have planned a massive rally in Grant Park again; the fact this is not happening is proof that, despite what you hear coming out of the Ministry of Truth that is the national media, the Democrats really do not expect Obama to win this election. Campaign operatives in Chicago are, thus, making appropriate preparations for his imminent defeat.
Instead of Grant Park, Obama’s apparently going to have his election night event at McCormick Place…the convention center here in Chicago. 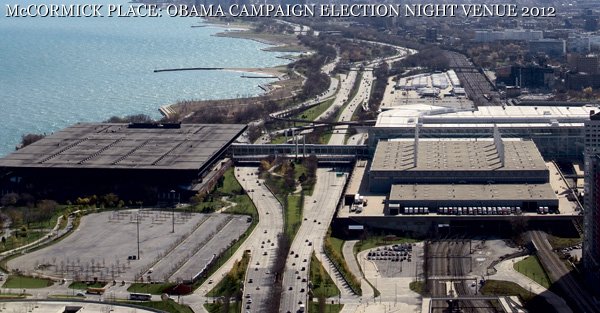 Let me explain a few things about McCormick Place that you could intimate from the photo above:

• it’s separated from the City by highways and is hard to reach by anyone traveling on foot from the various “El” trains that service Chicago…which indicates this event is not intended for throngs of Obama supporters.

• there are no buses that readily service McCormick Place like they do Grant Park…so once again, this event is not being planned for the public to come and celebrate with Obama.

• McCormick Place is completely indoors and is a venue that Democrats can easily control in terms of the camera angles and stagecraft of the event…which is a big deal because losing campaigns choose small, isolated places to hold concession speeches while winning candidates are feted on election night in, well, places like Grant Park.

I was an event planner here in Chicago for several years before the 2008 presidential campaign. I planned events in McCormick Place for various trade shows; it’s a building designed with flexibility for downsizing an audience if the need suddenly arises so that the participants do not feel lost in too much extra space. There are modular walls that achieve this, with dividers capable of cutting a space in half…and then in half again…if that’s what needs to be done to make a sparse crowd seem bigger for cameras.

...McCormick Place is not a spot to hold a victory rally, folks... but it is the ideal spot to give a concession speech... Take a look at that photo above again. The place sits on the highway. After the results come in, Obama just has to deliver his concession and then he’s in his car and on his way to his house in Hyde Park while Mitt Romney takes the stage in Boston as the new President-Elect. The highway that runs through McCormick Place leads right to Hyde Park…it would be less than a three minute drive for the Obama motorcade after they leave the convention center to head home and sulk.

I just don’t know any way else to put this, but planning his event at McCormick Place instead of Grant Park again (or another high profile outdoor venue like the Pritzker Pavilion at Millennium Park, for instance) is a tacit admission that the guy is going to lose and will have an early bedtime on Election Night in Hyde Park at the Obama/Rezko Mansion.

From Kevin's lips to God's ear.

What a thrilling thought -- if he's true, the Dems know they have been distorting the polls and will have a defeat on their hands -- oh, please let it be true.

I hope it's true. Look at the 2 campaigns though. Which looks like the winning, confident one? Which is begging for votes and acting stupidly and desperately? So whatever the poll spin is, just checking out how the campaigns are behaving, gives the real story.

I hope that you are correct, however...the security conditions in Chicago are abysmal. The gangbangers are shooting each other and innocents at a horrifying rate. I can't imagine being able to control such "people" in a manner conducive to The President's safety.
An indoor, physically isolated venue is the intelligent security choice.

RM, It is true crime in Chicago is terrible, but was it THAT much better 4 yrs ago? Besides, I don't see them trying to hurt Obama, especially if he wins.

If this is true, and I 1) know Chicago well enough to picture this part of the city (and it IS VERY pedestrian unfriendly) & 2) I trust Kevin's info enough to believe it IS true, this is where we want to be 2 weeks out. It looks good for Romney. That being said, we cannot stop until Romney has his 270 electoral votes & we must remain on alert for an upset Obama to try to ram through stuff during his last 2 months in office. Despite all the good signs, our work is FAR from over.

I wonder where Mitt Romney will be election night...

"Sulk" is not the verb I think would describe what that one will be doing, if this scenario plays out. He will be crushed, inconsolable, shattered to the very empty heart of himself. All of his pretty little fantasies and delusions about his soi disantsuperiority will turn to dross before his eyes, and he'll be left brooding over the scattered shards of his fragile little ego.

And then, with his mate, gigantor whispering in his ear and prodding him in the short ribs with that highly toned elbow,then he will turn truly mean, and petty, vicious, and under-handed. And if we thought he and his crowd had debauched the office up 'til now, they will prove us wrong. We will be shown a whole new low, mark my words... As the fourth comment said, he will try and no doubt succeed in ramming through all sorts of horrors, and executive orders hiding crimes against decent humanity. I have always averred that those last two months will be the most vulnerable time for us all, should he lose.

(And as an afterthought, since the 2 months was a concession to glacial ground travel in times past, And anyone can reach anywhere on this globe in under 24 hours now, I think they should amend things to allow the new president to take office on the first Monday following Election Day.)

What about the third scenario Doug?

Obama uses McCormick Place to announce evidence of massive election fraud and his lawsuits to re-count every vote in PA, OH, IA and WI?

I'll agree he is ready to move on, but I do not see the Obama infrastructure letting go so easily.

"sulk"? I think he will go home to Hyde Park and plan his scorched earth policies to punish America for not reelecting his highness.

Karl beat me to it, somewhat: a better place from which to announce Martial Law, suspend the results and lock it all down.

I wonder when Berry HIMSELF first relalized to himself he was going to lose?

I REALLY doubt that all of the thugs that call hismelf the whitehouse staff would ahve the guts to tell him.