30 Blocks of Dog Sh** and Democrats 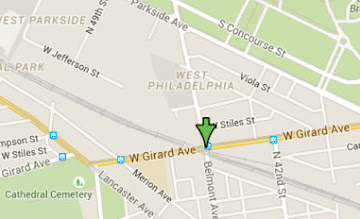 Earlier this week I left for work on a cool crisp sunny morning at 6:30 am. Traffic seemed lighter than usual. Even the Schuylkill Expressway was moving smoothly. I just knew it was going to be one of those rare 45 minute uneventful commutes. Boy was I mistaken. Half way down the Schuylkill traffic came to a grinding halt. I flipped on the traffic report and found out there was a bad bus accident near Girard Avenue blocking two lanes. My delightful commute had turned into a house of horrors. We inched along at 5 mph for the next five miles.

My Plan B was in effect. I’d get off at Belmont Avenue and take that to Girard Avenue (Route 30) and then down to 34th Street where I usually end up in the morning. Of course, hundreds of other drivers chose the same Plan B. The ramp to get off the Schuylkill and onto Belmont was jammed. I eventually got onto Belmont and proceeded past City Line Avenue and into the jungles of West Philly. My day got even better when there was an accident on Belmont in the right lane that delayed my commute further. But I eventually made it to the intersection of Belmont and Girard, making my left turn into... squalor.

I only had to traverse these means streets of West Philly for 10 blocks to gain the relative safety of the Zoo area. Of course, these ten blocks were a different type of zoo, with it’s own unique habitat and wildlife. One problem. The route was gridlocked because so many cars were trying to go around the accident on the Schuylkill. This meant I got to inch along for ten blocks and observe the Squalor in minute detail. As I have documented in dozens of previous articles, the depravity, decay and degradation of West Philly cannot be overstated. It has to be seen to be believed. A once thriving neighborhood in the 1950s now looks worse than downtown Baghdad after shock and awe.

The picture below is representative of 75% of the houses along this stretch of squalor. The occupied houses are crumbling hovels, with collapsing porch stoops, broken windows, leaking roofs, and a generally dilapidated state of repair. The sidewalks and streets are in a similar state of disrepair, as the City of Philadelphia doesn’t give a crap about this part of Philly either. The corrupt Democrat politicians spend their dwindling cash horde on union pensions and keeping the white people in Center City and Society Hill safe from the dregs in West Philly. The funniest part is this section of West Philly has been declared an Obama Keystone Zone. I guess I’m missing the revitalized part. 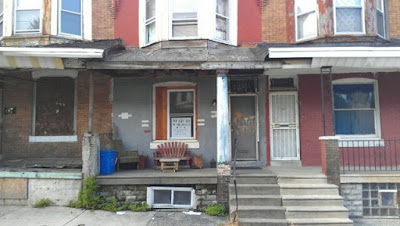 As I observed the decaying landscape, I wondered why it has come to this. Liberal Democrats have controlled the city for 60 years, with virtually no opposition from Republicans. West Philly precincts voted 99% for Obama in 2008 and 2012. The Great Society welfare programs have been in effect for 50 years. I can guarantee you at least 90% of the people along this stretch of squalor are on welfare, SSDI, Section 8, Medicare, SNAP, and the myriad of other tools for keeping them voting Democrat. Welfare programs were supposed to lift the poor out of poverty. Instead it has enslaved them in squalor by taking away their incentive to improve their lot in life. The result can be seen along Girard Avenue.

Democrat politicians have taxed, regulated, and shaken down businesses for decades, forcing them to leave the city. When businesses leave, jobs leave. Government fills the breach by hiring more union government drones and spreading the dwindling taxes of the producers to the non-producers in the form of entitlements. The white flight began in the 1970s and is complete in major areas of Philly. There are virtually no white people living on Girard Avenue. When I observed a tough looking white dude sitting on the porch of a hovel, I was shocked by his bravery and/or stupidity.

The Democrat politicians who have ruled Philly for decades have certainly created the dynamic of decay in West Philly. But, the black people inhabiting these neighborhoods deserve a portion of the blame too. When you drive down Girard Avenue, you notice a Direct TV dish on the top of every inhabited hovel. The people shuffling along the crumbling sidewalks are wearing high end sneakers and tapping away on their iPhones. There are plenty of $30,000 to $50,000 vehicles parked in front of their $20,000 hovels. So they appear to have enough money for luxuries, but it is too much for them to pick up the garbage littering their streets, fix a broken window, or slap some paint on a window sill. No matter how poor, you are responsible for your home and your neighborhood. 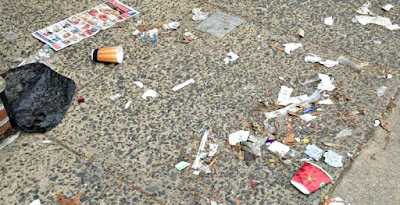 As I continued my slow trek I observed something that captures the essence of West Philly and the people living there. I looked to my right and my attention was drawn to the sidewalk where something brown extended for at least five feet in the middle of the sidewalk where people would expect to walk. At first I wasn’t sure, but as I got closer it was clear. It was multiple piles of dog shit. Evidently from a big ass dog or dogs. One or more of the fine inhabitants of this neighborhood thought it was just fine to let their Rottweilers take a dump in the middle of the sidewalk and not clean it up. That attitude represents the 30 Blocks of Squalor to a tee. If you have no self respect, you have no respect for others. The people living in these neighborhoods are ignorant, selfish, and wallow in their self imposed poverty, while waiting for government to lift them up. 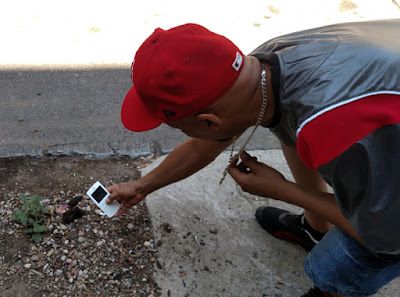 Not every person living in West Philly is an ignorant, lazy, welfare queen, dependent upon the state for their sustenance. But facts don’t lie. Most of the residents are on welfare. Over 50% of the school students drop out in high school. Over 75% of the children are born out of wedlock (I observed two girls who couldn’t have been over 15 years old walking down the street looking 8 months pregnant). The black males impregnate girls and do not take responsibility for raising their children. Drugs are rampant and represent the major commerce in West Philly. You can anticipate at least one shooting per night in West Philly. Over 70% of the working age population of West Philly are not working. Why work when the government sends you money? The welfare state (aka socialism) always leads to this result.

So what does the corrupt left wing mayor of Philadelphia propose to cure the ills of the poor in West Philly? A sugar tax. This is how dishonest liberal politicians operate. Not only does mayor Kenney look like a long beaked doo doo bird, he has an IQ on the same level. His bait and switch lies to get his sugar tax passed by an all Democrat city council have been outrageous and disingenuous. His propaganda campaign said he was going to save the children from dangerous sugary drinks and use all the tax proceeds to fund pre-K and recreation centers for the kids. It’s always for the kids. Except it was all a lie. The two faced thieving bastard voted against the very same tax as a city councilman when the previous corrupt incompetent mayor proposed a soda tax. 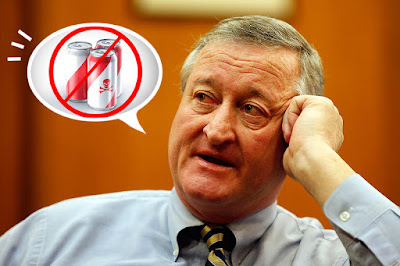 The minds of liberals are not rational or honest. It was sold to the public as a sugar tax with all proceeds going to the children to make them smart. Philly already spends $12,000 per kid per year and they matriculate functionally illiterate morons into society, if they even graduate. Kenney and his minions actually expect you to believe spending another $1,000 per kid will make them smart. The stupid – it burns. Kids without concerned involved parents living in a two parent home don’t stand a chance. The failure of the black community to provide that setting will keep their spawn ignorant and trapped in poverty. But, Democrats love to use them for new taxes.

Public opinion and the business community was strongly against this new tax. It will result in less business for retailers as prices rise astronomically on their biggest selling beverages. The tax will hurt the poor and ignorant far more than the middle and upper classes. The price of a 2 liter bottle of soda will rise by 50%. The price of a jug of lemonade or ice tea will rise by 66%. This tax is in addition to the 7% sales tax, already 1% higher than PA (for the kids). The impact of this illegal tax will be borne by the people of West Philly. PA law does not allow localities to impose sales taxes, but Kenney and his band of reverse robin hoods impose this tax on distributors to skirt the PA law.

And now for the best part. At the 11th hour, as Kenney was paying off the various constituents and offering bribes to opponents, he made some slight deviations to his “sugar tax”. He extended the tax to diet beverages which have NO SUGAR in them. He sold the tax to the public as a health issue. Then he obligated over 60% of the tax revenues to the general fund – not to Pre-K or rec centers. The bait and switch was complete. He bought the votes in city council with bribes, going against the will of the citizens. He then earmarked most of the money to paying the gold plated pensions of his government union lackey supporters. The tax passed yesterday.

This is how it rolls in Philly. Corrupt politicians, greedy unions, failing public schools, decaying infrastructure, outrageously high taxes and an ignorant welfare enslaved populace combine to ensure the ultimate bankruptcy of a once fine city. As Kenney and his Democrat brethren continue to suck the citizens dry while feathering their own nests, the $8 billion unfunded pension liability grows ever larger as it swallows up a bigger portion of the budget every year. Maybe they should impose a garbage tax or a dog shit tax on the people next year based on the amount of trash and dog shit in front of your hovel. Maybe that would clean up Girard Avenue. 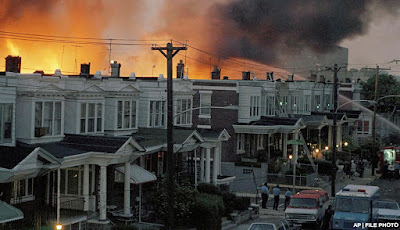 Dog shit and sugar taxes tell you everything you need to know about the corrupt Philly politicians and people living in West Philly. A match made in 30 Blocks of Squalor heaven. There is no solution. This city is too far gone. The people of West Philly have been indoctrinated into this lifestyle over generations. It will eventually end in tears when the city goes bankrupt and the welfare money dries up. Then it will burn.

If you want to take the Admin tour down Girard Avenue, click the link below and go left on Route 30. Tell me I’m lying or exaggerating. And don’t miss the mural of black kids playing polo just before 39th Street. Very inspiring to all the ghetto polo players in West Philly.

The deserve the government they elect. Screw them