In May of 2008, the FDIC began an RFP process to help manage and resell its immense portfolio of foreclosed real estate. It received proposals from 18 firms.

Feinstein wrote to the FDIC head on Oct. 30, as her husband's firm (CBRE) was still competing for the contract. Bair responded in November, noting that she had not been able to convince Treasury to fund her plan for handling foreclosures.

Click to zoom
On November 13th, the FDIC inked a contract with CBRE that could yield tens of millions of dollars (or more) when most commercial real estate firms are dying on the vine. CBRE was suffering greatly; its share price had hemorrhaged from $24.50 in May to $3.77 in November. 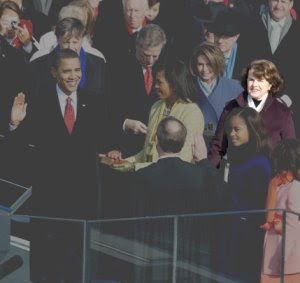 Feinstein's husband's partnerships bought 10.6 million shares at a price of $3.77.

Several days later, the FDIC announced CBRE had won the contract. Foreclosure management experts call the contract "highly unusual" and stated that some of its fees were "egregious".

On January 6th, Feinstein introduced a bill seeking $25 billion from TARP to help bankroll the FDIC's unfunded proposal. Her intervention was "unusual" since she isn't a member of any relevant committee and the FDIC operates using insurance payments from banks.

Gee, I'm sure Feinstein and her husband had no earthly idea what the other was doing. It was all just a coincidence that Feinstein intervened with the FDIC just before her husband's company won a "highly unusual" management contract with "egregious" fees.

Together, Feinstein and her husband are worth north of $52.3 million, according to her 2007 financial disclosure. Maybe you and I can pay higher taxes to get them up to, say, $250 million or so.