A startling discovery is shaking the very underpinnings of space science. An exclusive photo depicts an enormous space "blob" that exists at the very edge of the universe.

A newly found primordial blob may represent the most massive object ever discovered in the early universe, researchers announced today... The gas cloud, spotted from 12.9 billion light-years away, could signal the earliest stages of galaxy formation back when the universe was just 800 million years old...

...Himiko holds more than 10 times as much mass as the next largest object found in the early universe, or roughly the equivalent mass of 40 billion suns. At 55,000 light years across, it spans about half the diameter of our Milky Way Galaxy... 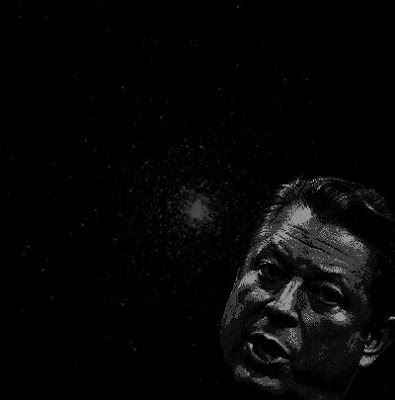 Lyman-Alpha blobs remain a mystery because existing telescopes have a hard time peering so far back to nearly the dawn of the universe.

Himiko sits right on the doorstep of an era called the reionization epoch, which lasted between 200 million and 1 billion years after the Big Bang. That's when the universe had just emerged from its cosmic dark ages and had begun brightening through the formation of stars and galaxies. Hot, energized hydrogen gas from that time period has allowed astronomers to begin seeing some objects — as much good as it does to squint at such fuzzy blobs.

...[New] research hinges upon the future success of a risky repair mission to the aging Hubble. Astronauts are slated to blast off with the space shuttle Atlantis in the attempt next month...

To be fair, the illustration is my own depiction, representing a gaseous blob of enormous proportions.

Click here to see a grainy photo of the real primordial blob.

at 10:14 PM
Email ThisBlogThis!Share to TwitterShare to FacebookShare to Pinterest
Labels: Scitech