Sean Connery in his hey-day, that is. And not this startling creature. 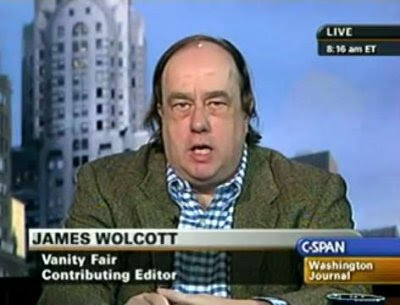 Apologies, my friends, for the shock. This is James Wolcott, chieftan of C-list lib pundits, appearing (appropriately) on C-Span yesterday. His mission: to position Tea Parties as ineffectual gatherings of millionaires bent on hamstringing President Obama's populist destiny.

Mark well the face itself, emerging as Al Gore's once did and will again, from a sheet of flab animated only, like a clone of Clutch Cargo, by a sybarites' lips from which comes two, count'em, two voices. It's a shocking effect -- as if a frog and an alley cat were trapped in his lungs and struggling for supremacy.

The two voices give it all away and make one shudder. One seems a studied and controlled baritone quaver. A voice possibly formed and mellowed by many meetings with a media trainer. It soothes you and takes down your guard until your ear is shredded by the eruption of his authentic neuter's squeak at random intervals. It is as if Wolcott is doing all he can to keep sounding vaguely manly, but just can't quite keep his inner sissy in check. Little wonder since he obviously spends so much time riding his inner hobby horse everywhere except down the King's highway.

Michelle Malkin slices Wolcott to the core with commentary as elegant as it is accurate; she plunges a rhetorical steak-knife into the throbbing chest of the mainstream media.

Keep this in your memory banks. The face of the Tea Party-bashing movement: 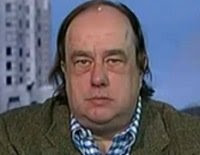 That, dear readers, is a face made for blogging.

at 7:23 PM
Email ThisBlogThis!Share to TwitterShare to FacebookShare to Pinterest
Labels: Democrats, MSM

Well, he's not good looking, but he's a lot funnier than you.

Wolcott is witty, urbane, married to a critically acclaimed novelist, bilingual - you've descended, on the other hand, to grade school mockery.