Brandeis College in Boston has scheduled our favorite terrorist, Bill Ayers, for a speech. Brandeis is a typical liberal institution and -- apparently -- uses the term "College" loosely. 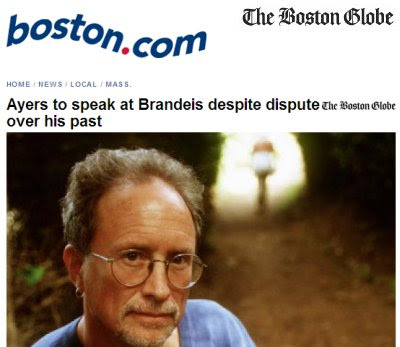 And Brandeis takes its role as a bully pulpit for terrorists seriously.

"This is about freedom of educational opportunity," said Brandeis spokesman Dennis Nealon. "The university has made it clear that it is not going to bar the talk despite the controversial nature of the speaker."

What Ayers has to do with 'freedom' in any form is a mystery for anthropologists of the future to figure out, as Ayers and his wife are quite open about their Communist leanings.

Due to vocal opposition, Ayers' recent trips to speak at Naperville High School in Illinois, an indie bookstore in the same town and at Boston College have all been canceled.

By the way: does it seem like Ayers is trying to get out of house a lot these days?

But if you were married to the despicable shrew Bernadine Dohrn, you'd be heading out on weekly road trips too.

Let's get out the word: here's some contact information for the relevant parties:

Dr. John Hose, Executive Assistant to the President and Assistant Secretary of the Corporation
781-736-3005       hose@brandeis.edu

Call or email... and politely express your opposition to the likes of Ayers indoctrinating our youth with despicable and anti-American leanings.