Days ago, The Washington Times discovered that Feinstein intervened with the FDIC in 2008. At its face, it appears to be a blatant quid pro quo steering millions of dollars of foreclosure business to her husband's company.

Click to zoom
After her intervention, the FDIC awarded a contract termed "highly unusual", both because of the margins CBRE could earn and the fact that the company did not have significant foreclosure experience. Less than sixty days after the award, the FDIC received $25 billion in TARP funds.

And despite an obvious conflict-of-interest as "a member of the Military Construction Appropriations subcommittee, Sen. Feinstein voted for appropriations worth billions to her husband's firms." The value of various defense contracts awarded to a company controlled by Feinstein's husband totalled $3.7 billion. In 2007, Feinstein resigned from the subcommittee after increasing scrutiny instigated on both sides of the aisle.

The Presidio Trust appears to be yet another of Feinstein's family bonanzas, in what I am sure is simply another happy coincidence. 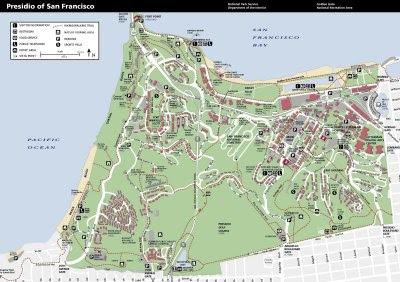 The Presidio of San Francisco is a park on the northern tip of land in a highly desirable area, overlooking the Golden Gate Bridge. In 1989, as part of a military reduction program, Congress closed the Presidio as an active military installation. And in 1996, Bill Clinton signed into law a bill creating an "innovative" public-private partnership that would control and manage development. That organization is called the Presidio Trust.

A press release on Rep. Nancy Pelosi's site describes the federal Presidio Trust Bill of 1996. The bill was introduced by Pelosi and Senators Boxer and Feinstein in the Senate.

The Philadelphia Independent Media Center's coverage was typical, expressing the left's outrage at the creation of the nation's "first privatized national park". 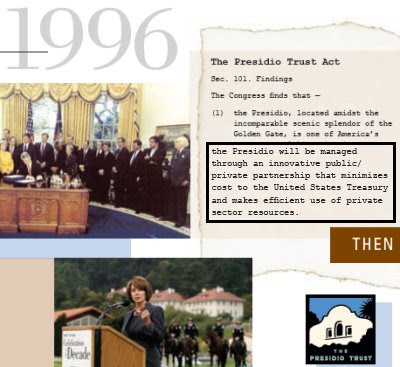 That's not all. In addition, The Sedway Group -- a subsidiary of CBRE -- was retained as a consultant by the Presidio Trust, though no mention was made in the official meeting minutes of Sedway's connections to Blum and Feinstein.

This looks like a beautiful gig: Sedway comes in and makes recommendations and CBRE gets to implement them.

In a nutshell, Senator Diane Feinstein's family keeps hitting the lotto, the taxpayer lotto, that is. 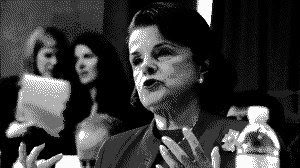 Washington is certainly a sleazy place, but Feinstein doesn't even appear to be trying to rise above the stench.

But today's Democrats are above the law anyhow, what with dozens of current ethical violations swirling about and an utterly disinterested mainstream media. So I suppose Feinstein doesn't have to even keep appearances up. Only a couple of bloggers will report on this egregious behavior, so it's like a tree fell in a forest and only a few idiot taxpayers were around to hear it.