I paraphrase, of course, but Brit Hume's message is clear. The longtime Beltway insider believes there is no possible way for Hillary Clinton to evade responsibility for her leadership failures and bungled cover-up.

Earlier today, on America Live, Hume had the following to say:

There’s really no way for her to escape responsibility for this if this testimony does what we all expect now that it will do. Of course, over the years in Washington I’ve seen many a hype hearing fail to live up to expectations. But if it does live up, there’s no way I think she can escape this. I think she recognized from the start that this was trouble. I don’t think it was an accident that Susan Rice, the U.N. ambassador, who was kind of an unusual choice, was the person who went out on the Sunday shows to recite those talking points. I think then-Secretary Clinton knew that the talking points were shaky. 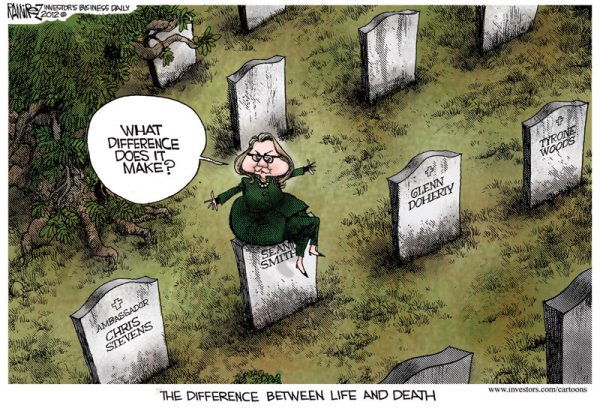 She may have participated in making them shaky. But she did not want any of that mud on her shoes that might be caused. And Susan Rice, of course, has paid a price for being the one who recited them. But we also know, as you suggest, Victoria Nuland, the State Department spokeswoman was involved in the crafting of those talking points. She reports directly or indirectly to Hillary Clinton, and she was telling the other people that were crafting the points that ‘my building,’ that means Hillary Clinton’s State Department, had a problem with this or that or the other thing and they were changed at her behest. Secretary Clinton cannot escape responsibility for that.

Let’s assume that she claims that she didn’t have any responsibility for that.” “What does that say about her stewardship of her department at a moment when a terrible thing has happened to an ambassador whom we’re to believe and she’s given every indication she had great faith in and cared a lot about? The murdered ambassador there was her subordinate. The staff there at the embassy were her subordinates. So if she took a walk during this, that doesn’t exactly recommend her for the person that will receive the middle of the night phone calls, does it?

I mean, I don’t think there’s any way for her to escape this even if she succeeds in arguing that she didn’t have her fingerprints on it. If she didn’t, she should have. And when she heard the talking points recited, she had to know they were wrong. If she didn’t, that’s dereliction. And if she didn’t know they were wrong, she should have said something. So she’s — I just don’t think there’s any way out, really. Look, she’ll get a vast amount of forgiveness. She’s an icon of the Democratic Party. A lot of people in the media will want to excuse her if they can, but the facts will prove too heavy.

We’ll have to see how bad it gets, but it’s certainly a weapon in the hands of her potential opponents, both within her party and in a general election if she gets that far. And the other thing, Megyn, is this also contributes to another question, which is — was she really a very successful and special secretary of state? I think the case for that is pretty weak. There was no great Clinton doctrine in foreign policy. Are there any treaties that she forwarded and help negotiate that made a big difference? Is the situation in the Middle East, which has always been a tinderbox that every American secretary of state must deal with — is that markedly improved by virtue of her stewardship of the State Department? I think the answer to all of those questions is probably no. So is this really a great credential for her as the last job she held going into a presidential campaign?

Of course not. Hillary Clinton has been an utter disaster as Secretary of State. Syria is awash in mass murder, chemical weapons, and Iranian missiles. Egypt is under the control of the Nazi-esque Muslim Brotherhood. Libya is a cauldron of terrorist activity. And Iran has -- or is about to -- acquire nuclear weapons. At the same time, North Korea and the People's Republic of China are seemingly at a tipping point.

But she's the greatest Secretary of State ever!

How many times have we thought that this detestable woman cannot possibly politically survive (fill in the blank)? The media is too heavily invested in the narrative that she is the natural choice to be the next President, and, as such, they will cover her ample ass.

And, I believe the maker of "the video" is still in prison. We should hope that he will soon be a rich man.
The only thing Hitlery has carved in stone are her breasts. Nothing else matters. Some legacy PIAPS.

The only thing Hillary Clinton has ever succeeded at is being a model of a rather dumb piece of trash.

It's really odd: what did a charmer like Bill Clinton ever see in her? Could they both have been raging drunks, with Bill blinded by booze until he woke up sober one morning and realized it was too late?

Nah, she liked it when he bit her lip, then realized he was her ticket out of Arkansas.

My perception of her is that of a pathetic 'wanna be' who, if it were not for her husbands career, she would not have one. The ignorance of her supporters, is absolutely mind boggling.

There’s really no way for her to escape responsibility

You do not, I believe, understand how our American Pravda operates. Either that, or Brit Hume does not.