Call 202-225-3121 and ask for the Speaker’s office. Tweet him @SpeakerBoehner and @EricCantor as well. Be polite and firm: Set up a Select Committee now to follow up on today's shocking testimony.

Set aside the disgraceful actions of the broadcast MSM today in not covering the riveting testimony of Greg Hicks, and set aside even the shocking conduct of the Administration on the night of 9/11/12 and during the days, weeks and months following.

The MSM is almost exclusive hard left and almost completely committed to the defense of President Obama and former Secretary of State Clinton. With a few, honorable exceptions they will ask no hard questions and conduct no follow-up, and of course the senior levels of the Administration are beyond shame and no “Deep Throat” is likely to emerge from their ranks.

But Speaker Boehner and the GOP control the House and they can almost instantly set-up a Select Committee to follow up on the shocking testimony today. The transcripts of my interviews with Stephen Hayes and Eli Lake will be posted here later, but it is enough to say that there were many extraordinary revelations made today and a great number of serious questions rasied which need to be asked and answered, quickly. 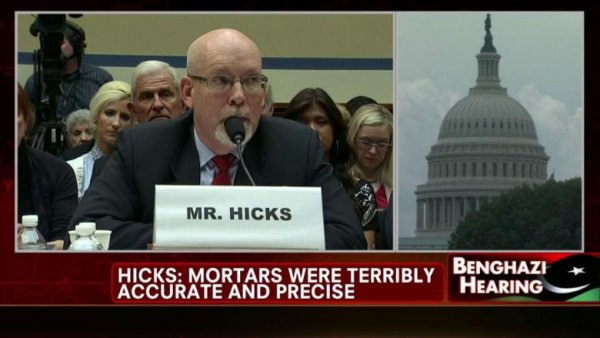 At a minimum the House needs to subpoena the NSA and the Department of State for the recording of the 2:00 AM phone call between Mr. Hicks and Hillary and her senior staff, a recording both I and Eli Lake suspect exists as a matter of routine NSA practice, if it has not already been erased. Subpoenas must also go out to Hillary, everyone on the conference call at 2:00 AM, and of course to Cheryl Mills, the enforcer of the cover-up. Lt. Colonel Gibson must be deposed, and his commander and then that man’s commander etc. until we get to the bottom of the stand down order. The denial of air assets from Aviano is another area of great interest. Investigators need to travel to Libya and speak with the senior officials there as to their response to being embarrassed by the Admiistration.

It must all happen quickly and without fear or favor. Not to establish a Select Committee draws the Speaker and the GOP majority into the very cover-up they are supposed to be investigating.

Call 202-225-3121 and ask for the Speaker’s office. Tweet him @SpeakerBoehner and @EricCantor as well. On my show alone we have heard calls for a Select Committee from Senators Ayotte and McCain and from Congressmen DeSantis, Gowdy and Jordan, all three of whom did extraordinarily fine work today, as did Chairman Issa and Congressman Chaffetz and many others. It is clear the Oversight and Governmental Reform Committee is far ahead of the other four committees “investigating” this scandal, but all must be brought under one roof with one staff and one set of questions and evidence.

Think about this: At 2:00 AM Hillary Clinton spoke with the man in charge in Libya who informed her the consulate had been attacked, the Ambassador was missing, and that his people had to evacuate. An hour later news of the ambassador’s death reached that man, Greg Hicks, and he informed the State Department.

Hillary never called him back that night or the next day.

Think as well about the fact that some of the most extraordinarily moving testimony ever given in the halls of Congress –given by Mr. Hicks about the entire evening but especially about the security forces who climbed the roof of the Annex in Benghazi to recover the dead and the wounded– and that it is not being played on most American media tonight.

There is nothing the Speaker and his colleagues in the House can do about the media or the Administration. But they can do the obvious and right thing, by establishing a Select Committee and thereby build upon the sense of urgency developed today, and they should do it now.

Call 202-225-3121 and ask for the Speaker’s office. Tweet him @SpeakerBoehner and @EricCantor as well. Be polite and firm: Set up a Select Committee now to follow up on today's shocking testimony.

Reprinted without with (thanks, Dr. Hewitt!) the permission of Hugh Hewitt. So I hope he doesn't sue me. But he's absolutely right. We need action now.

Done, and trying to get the word out on Twitter/fb and @ RR: