A Quiet Rage Building Across the Nation

Earlier this week I posted a graphic on my FaceBook wall that stated, “All across America a quiet rage is building against the assault upon American values. More so than ever in the history of America, the concerns and patience of its people are being tested, tried, and attacked by a group of elitists that are hell-bent on the destruction of this country.” It then ended with the phrase, “Refuse to remain silent!” 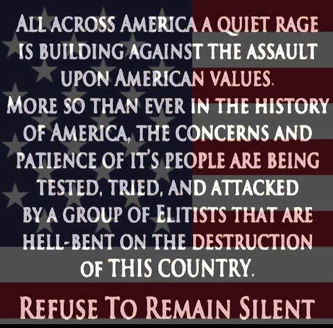 The post elicited responses by some who concurred with the sentiment, and some who didn’t. The posting afforded a teaching moment about what the right of the political spectrum feels about the “fundamental transformation of America” that has been occurring for several years, but accelerated dramatically over the past five.

Some were upset that the term “rage” was used, and thought it improper to be enraged toward those who’re dismantling our republic. But in a politico-cultural context, emotions like anger and rage can be a powerful motivator, especially in regard to values, convictions, and ideals that are violated and impinged upon.

Likewise, those of us who treasure America as the land of the free and the home of the brave, see contemporary statists, those who are actively engaged in expanding centralized governmental authority at the expense of personal liberty, as adulterators and enemies of freedom.

They are “fundamentally transforming America” into a fiercely potent centralized government that was never intended for this republic; a fascist police state that, regulates, coerces, bullies, and spies on its citizens. And they have done it surreptitiously, clandestinely, and dishonestly. How any thinking person, who professes love for America, can accede to the destruction of American idealism perpetrated by those who have a stated objective of “fundamentally transforming” the nation is beyond my comprehension!

And for those on the left who are obsessed with race, obsequiously regurgitating racist epithets against we who love what America used to stand for, it makes no difference what color the skin is of the torchbearer leading the destruction of American values. He could be green, white, red, or purple, and we’d still object to the dismantling of the country, as we’ve observed the past few years. Stated more succinctly; you mess with what made America great, and you start simmering a pot of patriotic rage until it reaches a boiling point, and race has absolutely nothing to do with it.

For men and women of principle, who believe that this country was special and intended to be different from the rest of the world, what is happening to America is not just unacceptable, but it’s evil. How else can the destruction of good be characterized?

Edmund Burke stated that, “The only thing necessary for the triumph of evil is that good men should do nothing.” We can no longer do nothing! The silent majority must find its voice, and a backbone!

When you think about it quantitatively, conservatives are mostly to blame for our current modified state of the union. How many conservatives refuse to vote if their candidate is not in the race, or are disengaged or oblivious to the destruction occurring around us, or do nothing, or say nothing, to preserve and protect our constitutional republic?

Speaking out against this erosion of freedom is good, but it’s simply not enough, and it must be more vociferous and protracted. Too many battle among themselves for ideological purity, fight amongst themselves over the most efficacious political tactics, or just throw verbal stones at those whose destructive policies are morphing the country into something never intended, but then flame out before anything is accomplished. If they don’t bother to vote, don’t get involved in the process, and don’t try to make a difference electorally, and worse yet, are divisive to the conservative ranks, they deserve some of the blame for what is happening. Every conservative must do what he can, and most of all, to vote. If every conservative voted in every election, statists wouldn’t stand a chance.

We who consider ourselves to be patriots, devotees to the principles that made America great, need to be proactive in our resistance to those who are corrupting and transforming our republic. We can no longer sit idly by complaining, and doing little else. The silent majority must find it’s voice, and then act!

Yea, in Germany when they started transporting the Jews to camps, the trains went by villages and churches during services. When the congregants heard the trains they began to sing louder.
The RATS told us every child was a precious child as they aborted millions. MADD told us it was for the children and now they are silent as cancer stricken children lose their health care. Women legislators told us we needed safer cars and guns, and now a car with its techno crap costs well over 30 thousand dollars and guns are in their cross hairs (have you shot on Forest Service land recently?). The woman's liberation movement vowed that the glass ceiling would be broken but they were silent when Sarah Palin was publicly raped by the media.
A quiet rage or louder singing?
We shall see.

The once happy and peaceful plains of America are either to be drenched with Blood, or Inhabited by Slaves.