Not for the faint of heart: 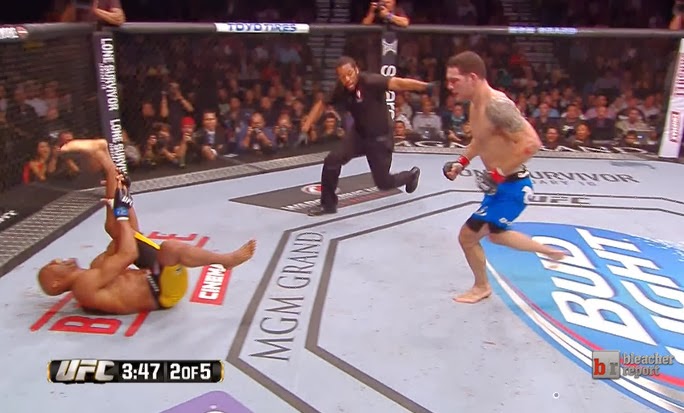 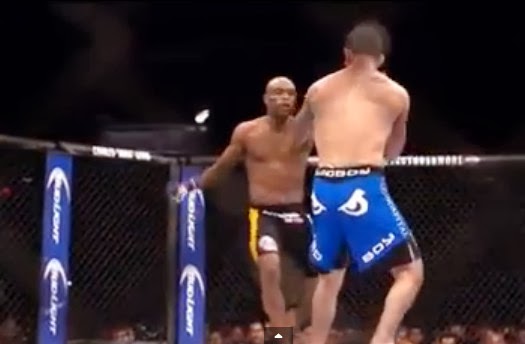 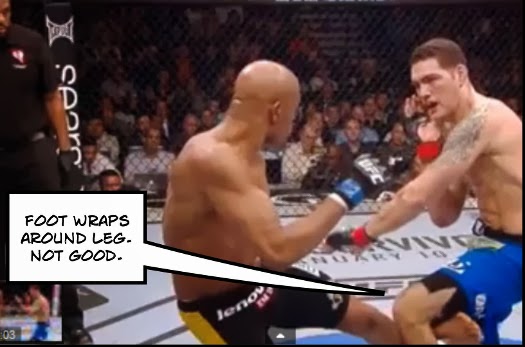 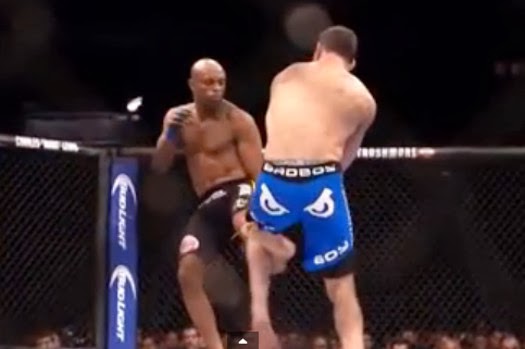 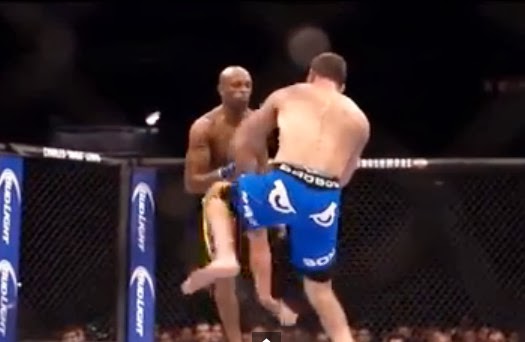 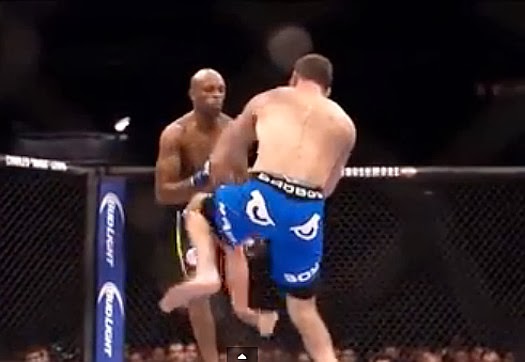 at 12:27 AM
Email ThisBlogThis!Share to TwitterShare to FacebookShare to Pinterest
Labels: Sports

say it isnt so joe (thiesman}

Lmbo.. sorry, but oh snap tickled me. Thanks for the laugh.

Legacy successfully tarnished. Beat countless opponents in the ring, but break your leg once....

Absolutely terrible to see such a devastating injury to anyone. Let alone to the best skilled fighter in the world. Made me feel sick. Tough way to see Anderson lose. Heal up bud

He will heal up, but never be the same. Don't be like the rest of the world and pressure a guy to come back prematurely then snap it again. #Derrick Rose

Maybe a video would be better instead of some shitty fucking screenshots?

Carma be a cocky prick see what happens

Im in the mood for a Kit Kat Bar

Im glad im not the only one who.doesnt find this situation not funny in the slightest bit. Im sick to my stomache and incredibly sad to see the most entertaining and skilled fighter in the world face an injury that may keep him out of the ring forever

Hope not but it doesnt look good :/

...So if you're playing football, try and favor the other leg.

Too bad about that cocky shite u pulled b4...I'd say many million$ were lost in endorsements. Shin guards maybe..?

Yes anderson was cocky the firat fight but he knows he was wrong, apologized, and came back the right way he was cool, calm, and collective, it was a new anderson and he diddnt deserve that dont be assholes he has kids and a family most of you watch him everyday and have no life, leave the guy alone.

good luck anderson, your still the greatest. hope your leg heals up well.

That doesn't bend that way!

That's not supposed to bend that way!

Anderson Silva and the UFC are just a bunch of LOSERS, and here is why. The UFC is always allowing losers since its inception, and you saw several cases of this in UFC 168 because Silva was just one of them. I hope Silva is in a lot of pain and the UFC loser championship goes bankrupt soon. Dana White your a Douche.

First, Anderson Silva never should have made it to the place he was. How weak do you have to be to break your leg with a kick, pathetic. The UFC is filled with one hit wonders and no competition. If Silva was a real man than trained hard, he would be made of tougher stuff, and fight real opponents all the time. His bones would be used to striking and building up calcium over fight training and kicks. Instead his leg broke like a chicken wing. The world is full of Chris Weidmans, and the UFC just does not allow all fighters to move up the ranks equally. How else do you explain a loser like Anderson Silva in the UFC spotlight for years, sad. Reminds me of the Brock Lesnar Fiasco all over. Steroid loser who never should have been number one. Brock did not even know how to box, or take a punch.

Second, lets look at all the steroid abusers like Chris Leben and Josh Barnett still with the UFC. By the way, nice Gynecomastia man boobs Barnett. At least WADA kept on your testing this time, and showed what a pathetic loser you are. They should do fat and blood testing of all fighters and you are caught you are banned for life. They can detect any steroids now, and the UFC just turns a blind eye like the state commissions that are bought off. It is why I think George St. Pierre is retiring all of a sudden because he is feeling some WADA heat. The same goes for football, baseball, etc.

Sports in America sucks and I really have not watched in years because of all the cheating steroid losers and fight fixing. If it were not for all the blogs, I would not have even known about Silva breaking his leg, too funny.

Instead of watching sports losers, and acting like you really know something about fighting you should start worrying about why America going bankrupt and check the next post. Only if you have time to worry about important things.

ALL PRODUCTS NOT JUST TECH

WAKE UP WORLD THIS PROBLEM IS HUGE

US GOVERNMENT AND ITS “ALLIES” ROBBED YOU

THINK HOW MUCH MONEY YOU WOULD HAVE NOW

It is very simple to fix this whole problem, and that problem seems to always be the USA. Everyone in the world and even the USA needs to boycott the USA. They also need to know where there data is going and ensure servers that do not touch USA. This is very simple to do but does have a cost. It is time to end all financial dealings with the United States, and all you have to do is see the trans pacific partnership deal they were trying to use to screw the world over.

The alternative, do nothing. If you do nothing, you may ask what is the USA doing with your data. They are using it to make money plain and simple. It is not for terrorism or any other grand adventure. It is to take the worlds money, just like playing poker, and knowing your opponents hand. If a company is ignorant enough to not secure their business without the USA and NSA spying, then using them is a sure fire way of destroying your business by espionage and stealing. Think how many trillions have already been stolen.

Microsoft has back doors to all its products. This includes getting rid of all microsoft products like windows and replacing it with Linux. People around the world should start writing for open source code to help linux work for the world. All companies should provide tech support and drivers for Linux.

Cisco routers have back doors to all their products and allow the USA companies in the know to learn secrets to your business.

This does not mean simply just use new encryption software. These companies built back doors and even your best encryption is not safe. Worse anyone can access your networks once the back-doors are released to the hackers.

Once trust is lost it is lost forever, and these corrupt American companies do not deserve another penny. They got funding from the USA government to take your information, and what should piss you off is they have it all right now. You have to change the game of your world business today. Don’t believe any American company that says it did not know it was being spied on. This is utter nonsense and the world knows it.

Educate the next generation and your business partners. No companies in the USA on your servers period. Boycott Microsoft, Skype, XBOX, Verizon, Google, Cisco, Apple, Facebook, Yahoo, AOL, Level3, Paltalk and there are 50 companies total so far look them up. There is a list of 600 corporations that supported the trans pacific partnership deal as well like Wal-mart, Monsanto look them up as well and boycott all of these bastards.

Now you might say all Americans are not bad, and why should I punish the whole USA. I am an American and I got two words for that, “Who Cares.” Whether America is Deaf, Dumb, Blind or Sloth and unable to make change, they allowed the US to get to this evil state. Inaction is the same as action. All companies in the United States need to be boycotted now. Find alternatives for all your goods and services and leave America out of the picture. By allowing ignorant America to fester you are simply allowing more pawns to spawn to be used for the axis of evil known as the United States.

Follow the work of the BRICS nations (Brazil,Russia,India,China,South Africa) and Europe and start to build a wall around the USA. Even Australia, you need to switch sides and abandon the USA for good. For every dollar you refuse the greater the world becomes and the more money you keep in your pocket. This includes, don’t forget, boycotting the rest of all businesses in the USA. Make the USA hurt until it turns against itself and stops screwing with the world. Brazil just did it by stopping a 4.5 billion dollar deal to Boeing for jets. World this can be done. Now is the time to drop the hammer on the United States once and for all.

Pissed On So Many Levels