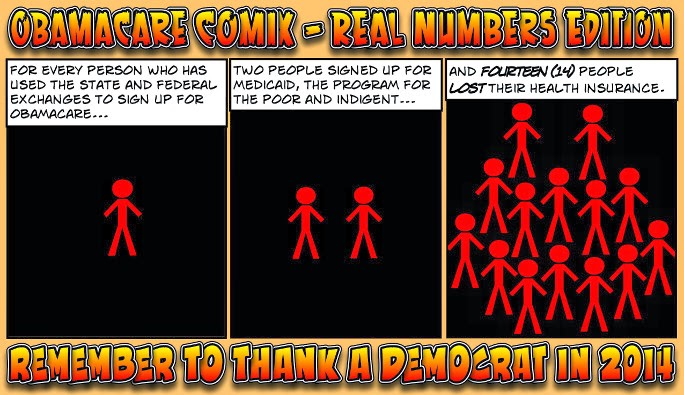 Speaking of which, Mark Steyn has an interesting question: "Why does Obama get a pass for sending a stuntman to sign him up for Obamacare?"

During the time when Obama was making promises, he said that he would sign up for ObamaCare when it was ready.

The common meaning of that is that he would use ObamaCare as his health insurance. That is, ObamaCare would be good enough for him to ACTUALLY use, an assurance that it would be good for the people. The nit-picking, narrow, useless meaning is that he would "symbolically" sign up for the fun of it, just to show that he can use a keyboard, and that the signup process worked.

That was another lie, and even his signup was symbolic once-removed, because he sent a servant to do it for him, assuming that the signup actually worked. How would we know?

The nature of the government has been set. Whatever a politician says is only a lie as commonlly, mistakenly understood by the people. There is always a narrow, wierd interpretation in which the politician claims he didn't lie. But, we know that he did.

It is now a supposed sophistication to understand that all politicians lie all the time. That is just the way it is. One is an ignorant peasant to believe anything a politician says. Sophisticated people know this, and they calm themselves by a belief that they personally will avoid being hurt by the schemes being woven.

There are rare exceptions, so few that they don't matter.

So, why should any part of government get our respect or cooperation? Lying is worse than not communicating, and our politicians (especially Obama) do precious little anyway.

The least we can do is vote out any politician who utters even one small lie. Let's act like the unsophisticated peasants which we are, while we can still vote.

It's not that people are "losing" their insurance, per se: They will all eventually have some form of ObamaCare (pardon my use of a ray cyst term :-), whether it be an Exchange Plan, Medicare, or Medicaid. They're simply in a "transition period" where they may not be covered, may not be able to keep their doctor(s), may not pay their lower premium, and may not get care in an adequate or timely manner.

I expect this "transition period" will last the remainder of their lifetimes...or, until the next "breakthrough" in health care coverage is unveiled in 15-25 yrs.

I remember when HMO's were the "next big thing" in health care: My company passed out brochures and buttons reading "Less is More", claiming that a system of simpler, tiered plans would be easier to manage and provide better care at lower cost to all. Of course, (to Mr. Garland's point) there was an underlying "lie" - "less" meant leas availability of choice, coverage, doctors and care, while "more" meant more premiums and profits. And, we all know what happened to HMOs.

Today, the tag line should be "More is More" - More coverage for more people - but, the practical result remains the same: Less of everything except premiums. The only difference now is the Government gets to completely run the show and once again substantiate the second greatest lie of all: "I'm from the Government and I'm here to help."

To MUSEman, Thank you for your support.