SHHH: No one tell Karl Rove or the RNC -- Chris Christie as popular as moldy bread in poll of conservatives

Granted, it's a non-scientific poll (click here to take it), but the results thus far can not be encouraging for the GOP establishment.

After all, the readers of this august journal are what we might call Constitutional Conservatives, Tea Party Patriots, Reaganites, and other assorted patriots. The Republican Party may know them as "the base", the same cadre of Americans that swept the feckless John Boehner to power in 2010. 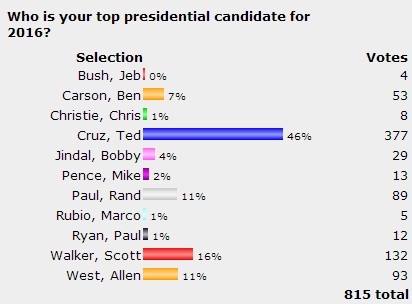 The lesson learned for Karl Rove and Reince Preibus: your pals Jeb Bush and Chris Christie are about as popular as skin lice and mildew, respectively.

Not that the Chamber of Commerce and the rest of the corporatists care; their agenda is levering government to achieve wealth. Our agenda is the opposite: it is to enable free enterprise by restoring the Constitution.

at 7:47 PM
Email ThisBlogThis!Share to TwitterShare to FacebookShare to Pinterest
Labels: Bush, Christie

Though you "Doug" would still be a nice addition to the Republican Party.

The only real difference between you and me is that I've seen a HELL of a lot more of what the democrats have done to OUR country.

Just for the sake of power.
I could take our country voting in a left winger once out of ignorance, but twice?

That was way too much.

I left politics, that was the straw that broke this camels back.