You can read the headline like this: Barack Obama, Bill Clinton, his hatchet-man John Podesta, and the rest of the Democrat Party are bought and paid for by the nation's biggest corporations.

Let me just say that these corporate executives are beyond stupid.

Are they not seeing what happens to companies -- like health insurers -- that collaborate with the federal government? 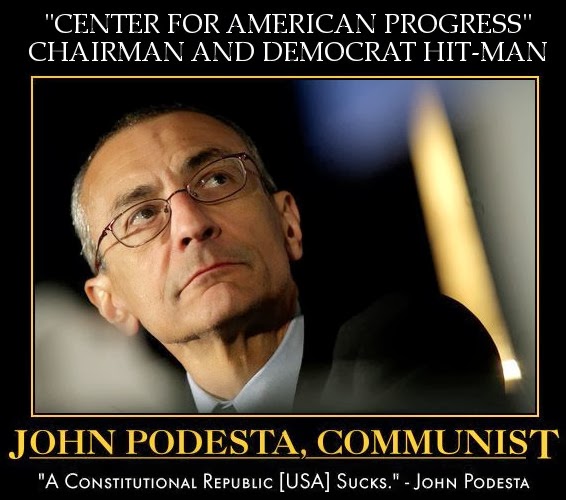 Inevitably, the government's insatiable appetite consumes them -- and these jamokes will be no different.

On Friday, the Obama- and Clinton-allied Center for American Progress finally revealed its long-sought corporate donor list after heavy pressure arising from CAP’s quasi-lobbying history. That scrutiny ratcheted up following the announcement that CAP founder John Podesta would be formally joining the Obama administration. Both Politico and The New York Times called for the donor list to meet the public eye.

The revelation that huge corporations have been footing the bill for the CAP shatters the myth that major corporations are right-wing repositories. In fact, it shows precisely the opposite: major American corporations including supposedly conservative ones like Walmart are largely in league with a massive government that supports massive subsidizing legislation. Crony capitalism is the order of the day, and it skews leftist – and impacts the donation patterns of America’s most profitable companies.

Gee, and I always thought it was the Republican Party that was in bed with the "evil corporations".

Turns out that the lying leftists of the Democrat Party are secretly funded by those very same cronies.


Ben Shapiro is Editor-At-Large of Breitbart News and author of the New York Times bestseller “Bullies: How the Left’s Culture of Fear and Intimidation Silences America” (Threshold Editions, January 8, 2013). He is also Editor-in-Chief of TruthRevolt.org. Follow Ben Shapiro on Twitter @benshapiro.

Also cars in the in-coming lanes switching over to the out bound lanes directly for me. More than once, and the one's who have done it to me told me that it was a WARNING.

Don't need to read the book on left wing culture.

You better believe it rattled me.
But it did NOT stop me. Why? Can't let the bad guys win, plus going through more life, and death just from being in the wheelchair. YOU KNOW YOUR METAL.