"What happened on Thursday... will stand as one of the most lawless acts yet committed by this administration"

Avik Roy of Forbes is one of the unsung heroes in the battle against Obamacare. His latest article -- "Government Takeover: White House Forces Obamacare Insurers To Cover Unpaid Patients At A Loss" -- outlines the increasingly frenzied thrashing of an administration that is operating completely outside the boundaries of the Constitution.

Of all of the last-minute delays, website bungles, and Presidential whims that have marred the roll-out of Obamacare’s subsidized insurance exchanges, what happened on Thursday, December 12 will stand as one of the most lawless acts yet committed by this administration. The White House—having canceled Americans’ old health plans, and having botched the system for enrolling people in new ones—knows that millions of Americans will enter the new year without health coverage. So instead of actually fixing the problem, the administration is retroactively attempting to force insurers to hand out free health care—at a loss—to those whom the White House has rendered uninsured. If Obamacare wasn’t a government takeover of the health insurance industry [before], then what is it now? 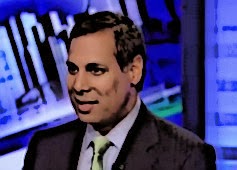 On Wednesday afternoon, health policy reporters found in their inboxes a friendly e-mail from the U.S. Department of Health and Human Services, announcing “steps to ensure Americans signing up through the Marketplace have coverage and access to the care they need on January 1.” Basically, the “steps” involve muscling insurers to provide free or discounted care to those who have become uninsured because of the problems with healthcare.gov.

HHS threatens to throw non-complying plans off the exchanges

HHS assured reporters that it would be “urging issuers to give consumers additional time to pay their first month’s premium and still have coverage beginning January 1, 2014.” In other words, urging them to offer free care to those who haven’t paid. This is a problem because the government has yet to build the system that allows people who’ve signed up for plans to actually pay for them. “One client reports only 15 percent [of applicants] have paid so far,” Bob Laszewski told Charles Ornstein. “So far I’m hearing from health plans that around 5 percent and 10 percent of consumers who have made it through the data transfer gauntlet have paid first month’s premium and therefore truly enrolled,” said Kip Piper.

“What’s wrong with ‘urging’ insurers to offer free care?” you might ask. “That’s not the same as forcing them to offer free care.” Except that the government is using the full force of its regulatory powers, under Obamacare, to threaten insurers if they don’t comply. All you have to do is read the menacing language in the new regulations that HHS published this week [PDF], in which HHS says it may throw otherwise qualified health plans off of the exchanges next year if they don’t comply with the government’s “requests.”

...There are other services HHS is asking insurers to offer for free. The administration is “strongly encouraging insurers to treat out-of-network providers”—i.e., costly ones—“as in-network to ensure continuity of care” and to “refill prescriptions covered under previous plans during January.” But the issue of unpaid premiums looms largest.

It’s unconstitutional to force insurers to cover people for free 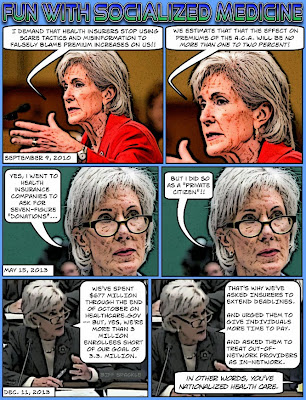 But, of course, the cost of paying for those mistakes won’t end up being paid by insurers, but by consumers, in the form of higher premiums.

In theory, the Obama administration’s actions aren’t merely illegal—they’re unconstitutional. The Fifth Amendment of the Bill of Rights says that no one can “be deprived of life, liberty or property, without due process of law; nor shall private property be taken for public use, without just compensation.”

But it will be up to insurers to sue to protect their rights. Like battered wives, they are unlikely to do so. Companies like Aetna and Humana are so terrified that the administration will run them out of business that they are more likely to do what they’re told, and quietly pass the costs on to consumers. The chaos and recriminations have made insurers like UnitedHealth, who have largely stayed out of the exchanges, look smart.

In 2010, PolitiFact said that the claim that Obamacare was a “government takeover of health care” was its “lie of the year.” The Federal Register disagrees.

So as the long list of Obama administration scandals continues to expand -- seemingly every day -- what are the Republican leaders doing?

You guessed it: allowing Democrats to destroy the spending caps ("the sequester") that had been promised for 10 years... just two years ago.

It's time to vote out every fake Republican. Find out when your primary is and start working to support the most conservative candidate you can in your local race. It's time. November is coming.

When you make a deal with the Devil, you will get burned. A lot of these companies, went willingly, with promises of lots of money with new enrollees. They should have never involved themselves in this, and should have told Obama he's on his own. They should have then hired legal help to fight him off.

It's hard to have sympathy for those who allow themselves to be treated this way.

When you vote in your party as a majority in the House, and your party picks John Boehner as Squeaker, the lawless acts of 'Barack Hussein Obama' (or whoever he actually is) and his handler Valerie Jarrett will continue as if Crazy Nancy Pelosi was still running the House.

When Boehner goes, we can start the recovery. Until then, enjoy 'Pelosi Lite."

HHS Secretary Sebelius is the real life equivalent of the character Wesley Mouch in Atlas Shrugged who issues Directive 10-289 to take over the economy and who talks in artful "bureaucrat-speak" with similar fascist effect.