China lands rover on the moon while U.S. space program is reduced to begging the Russians for rides

Unexceptional: China becomes the third country to land a spacecraft on the moon in preparation for a manned visit. Meanwhile, U.S. astronauts have to ride Russian spacecraft to fix toilets on the International Space Station.

Tourists visiting the Kennedy Space Center in Florida, where one of America's retired space shuttles now resides, were no doubt able to see news reports of the landing of China's first lunar vehicle, a solar-powered rover, on the surface of the moon. 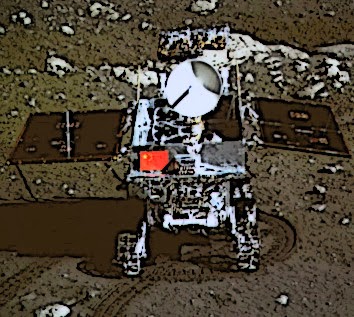 The landing of the rover 37 years after the last such mission by the Soviet Luna 24 sample-return voyage in 1976 makes China just the third nation to accomplish such a feat, joining the U.S. and Russia. Clearly, Beijing intends to be a player in space, just as on the global scene. On both scores, the Obama administration seems intent on making the U.S. a spectator.

The Chang'e 3 spacecraft and its lunar rover, sent aboard a Long March 3B rocket launched on Dec. 2 from Southwest China, is the latest triumph of an ambitious military-backed space program. Its goals include a manned orbiting space station and landing Chinese astronauts on the moon, possibly to plant their flag next to the U.S. flag left there in 1969. The rover itself is called Yutu or Jade Rabbit after the pet of Chang'e, Chinese mythology's goddess of the moon.

On Oct. 15, 2003, China's first manned spaceflight sent astronaut Yang Liwei on a 21-hour mission. An 8.5-ton space station module orbited in September 2011 was launched into space aboard a Long March 2F rocket. It was to be the prototype for a planned 60-ton Chinese space laboratory to be in orbit by 2020.

The Chinese plan to use their Long March rockets, comparable to the Delta IV heavy-lift vehicles used by the Pentagon, to lift 26-ton payloads, including a trans-lunar rocket, lunar module and lander, into Earth orbit from where the Chinese would go to the moon.

No doubt China's lunar landing will be met in some quarters with been-there, done-that yawns by those who insist we have more important things on our plate right now.

But this is the latest nail in the coffin of American exceptionalism and has serious implications for both U.S. leadership and security.

America's final space shuttle mission ended on July 21, 2011. On that day, Atlantis landed at its home port of NASA's Kennedy Space Center. It is there still, on display and out of commission. Prototype shuttle Enterprise is on display in New York at the Intrepid Sea-Air-Space Museum after having been towed there on a barge up the Hudson River.

In 2009, astronauts were ferried to the International Space Station aboard the shuttle Endeavor and were tasked with fixing a Russian-built space commode. They accomplished this feat on the 40th anniversary of the July 20, 1969, Apollo 11 moon landing. Now if our astronauts need to fix the plumbing, they have to hitch rides aboard Russian spacecraft. The cost is more than $50,000 for each cab ride.

It is ironic that the last manned mission to the moon, NASA's Apollo 17, left the lunar surface on the same day in 1972 as China's lunar lander arrived in 2013 — on Dec. 14. The last man to have walked on the moon, Eugene Cernan, told Fox News' Neil Cavuto something in 2011 that still holds true today:

"We don't have the capability today to put a human being in space of any kind, shape or form, which is absolutely, totally unacceptable when we got the greatest flying machine in the world sitting down at Kennedy in a garage there with nothing to do."

Whether we return to the moon or not is problematical. But right now it seems that if we do, the Chinese might just be waiting there for us.

NASA has been re-tasked to "Muslim outreach".

Beyond parody. If you made this up to mock Obama, you'd be laughed at for inventing something so absurd it couldn't possibly be true. Then you'd be called a racist.

Yet, that's exactly what NASA has been reassigned to do: make jihadis feel good about themselves.