If this doesn't prove that vintage media is dying, I don't know what will. 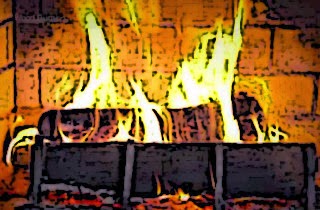 But how’d it do in the demo?

Dallas-Fort Worth local CBS affiliate TXA 21 played a loop of burning yule log on Christmas Eve into the morning of the 25th, accompanied by a holiday selection from a local radio station, and it was a (comparative) ratings hit.

According to Nielsen breakdowns, the “roaring fire” beat a Friends rerun and tied an episode of The Office.

No word on how badly MSNBC got pasted in the ratings, although I believe the all-night laundromat on 34th Street may have doubled 'em.

On Christmas morning, you can watch the burning logs, or the democrat media's burning of America.

For most people, an easy choice.

However, I believe this is a brilliant coinage and I'd repeat it often. "Appropos" (app + apropos). "I was looking for a good restaurant, so I checked 'Savored' on my iPad and that was so appropos."

I've never had a burning log tell my my eyes were lying. But if you need a daily fix of lies to be able to function, there is always the minority report(ing) for breakfast, or lunch or dinner.. You are what you eat, mind you.