Egypt Stays One Step Ahead of Obama [Dan From New York]


I had argued some time ago that the fall of Morsi and the Muslim Brotherhood in Egypt dealt a crushing blow to Obama’s scheme to empower the Islamist side in Israel’s volatile region – one which would be hard-to-impossible for Obama to turn back. 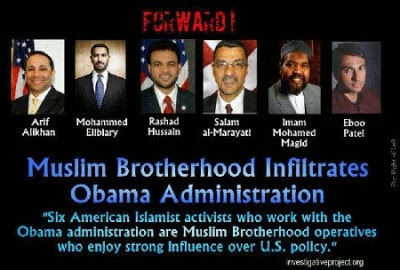 Now comes word the Egyptian military has taken further steps to shore up its gains; gains which Obama is now in no position to reverse.

To date, most of Obama’s foreign debacles have been easy for him and the White House media to sweep under the rug.

But this one is different. It’s disruptive, permanent and impossible to cover up.

CAIRO (AP) — Egypt's military-backed interim government has declared the Muslim Brotherhood a terrorist group, a dramatic escalation that gives authorities more power in cracking down on them.

Hossam Eissa, the Minister of Higher Education, read out the Cabinet statement after long meeting on Wednesday.

Eissa said: "The Cabinet has declared the Muslim Brotherhood group and its organization as a terrorist organization."

Eissa added that the implications of the declaration punish those who belong to the group, financing it and those promoting the group's activities.